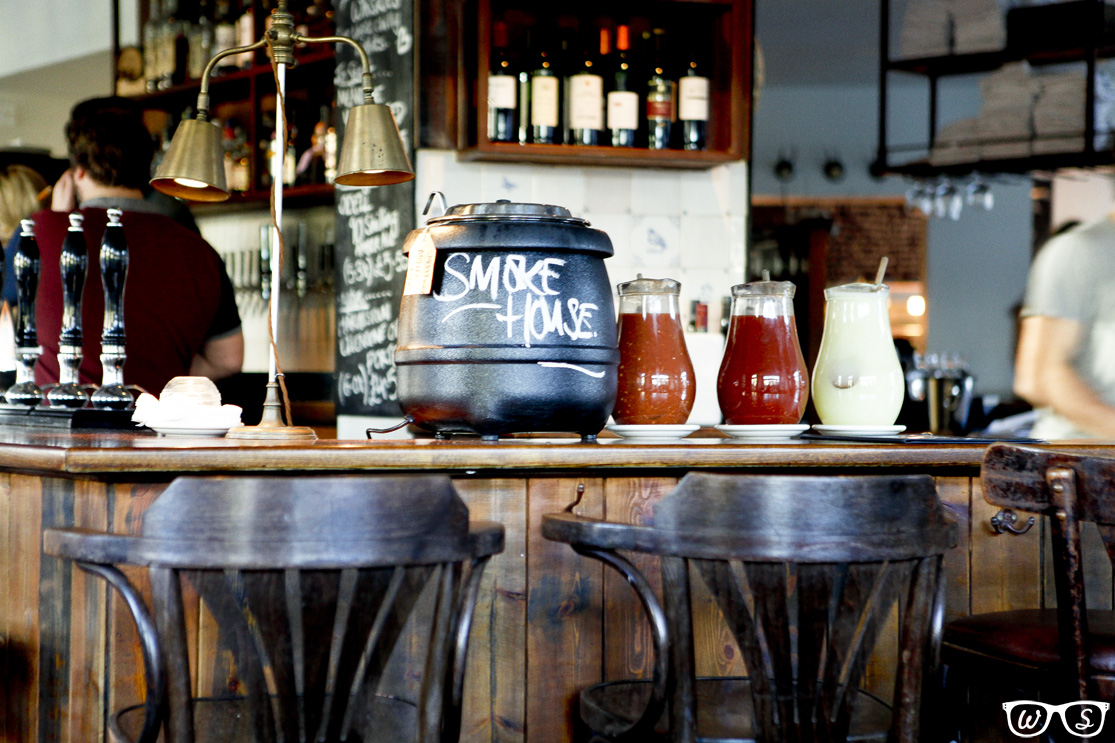 I am a meat eater. Nothing gets my taste buds juicing more than the thought of a prime piece of meat cooked to perfection over a hot smokey flame. The moment you carve the slightly charred slab of cow to discover the tender red flesh.......Alright, alright! So maybe you're a 'veg-o' and the mere sound of flesh turns your stomach to a jar of Holman's Hot English Mustard but there's no reason to click away just yet.

So when my pescatarian friend announced she had booked a table at Smokehouse for our annual Christmas get together, my curiosity senses kicked in... 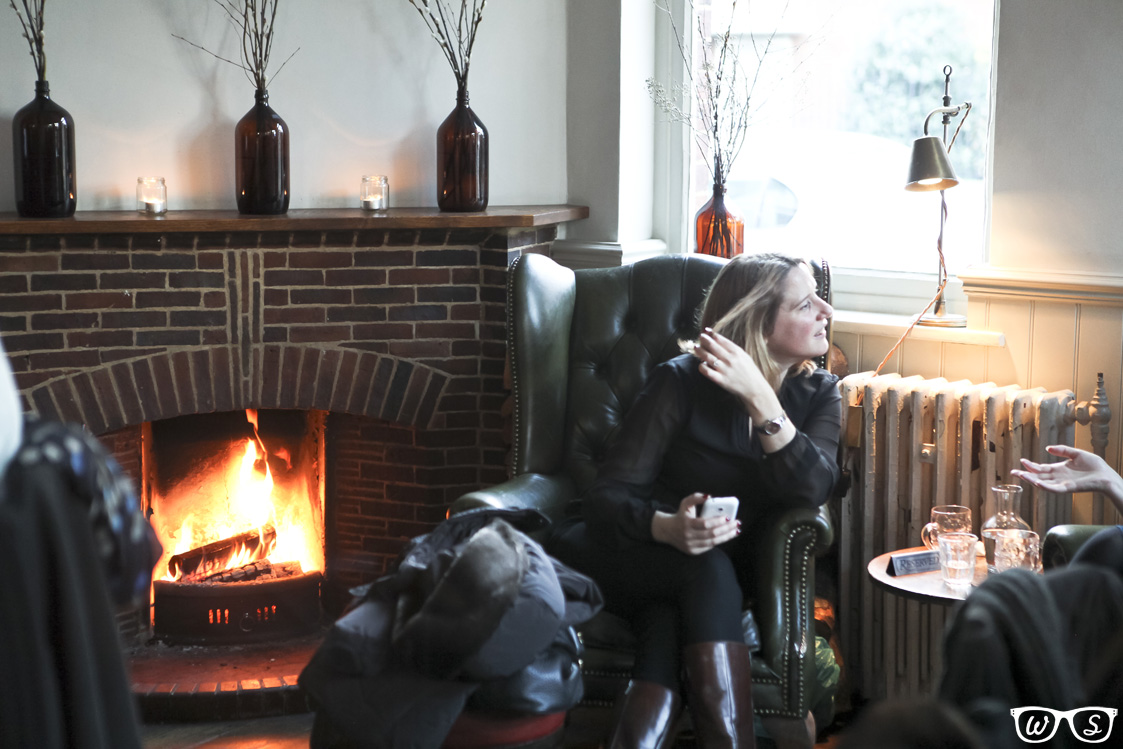 Christmas catch-ups by the fire with Sally...and Smartphone

Executive chef, Neil Rankin may have a background in the belly of fine dining, but spending time under Adam Perry Lang (the other half of Jamie Oliver's Barbecoa), it's little wonder his focus turned to a carnivorous desposition.

'Our philosophy is that we buy British meats and cook only with live wood and charcoal. No pellet cookers like most of the british BBQ industry' - Neil Rankin

So as I approached the cottage-like building with 'Smokehouse' above the door, I might have had idiotic premonitions of walking into a room filled with black smog, but I was greeted with scents of mulled wine and a cheerful smile. It could have had something to do with my rediculous Christmas sweater but I chose not to believe so and I sat at our long bench table. 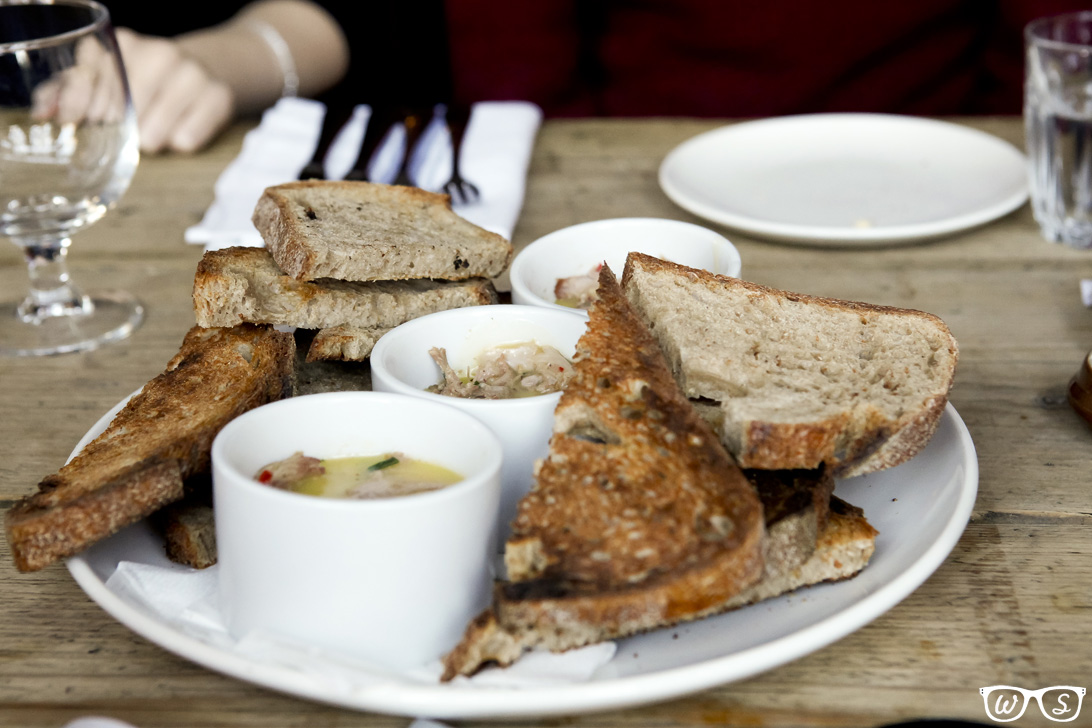 In time, all ten of us arrived and our glasses were filled with Prosecco, smoked Bloody Marys and some of the 20-odd craft beers available. As most of us have or still work in the hospitality industry, hearing that there was no menu brought as much excitement as a being that kid in that candy shop. Our first surprise came in the way of Potted smoked turkey with pickled cranberries, Smoked lamb samosas with mint jelly and Salmon tartar, smashed avocado & masa crumb. A samosa can sometimes be seen as the lower-echelon of finger foods, usually overcooked, dry, soggy or even just tasteless apart from the drippings of oil. These however, were perfection. Moist and well seasoned inside, light and flakey outside. I would have been happy ending there! It's not all about meat, and the friendly staff both front and back of [Smoke]house made sure my pescatarian pal was looked after. Her starter of Burnt leeks, shitake mushrooms, duck egg & truffle was "amazing!". I momentarily looked over to see what it looked like but only for just that, a moment. I was way too busy devouring the potted turkey and washing it down with some fine Bergerac.

Quickly cleared of our spotless plates, Mains arrived amid a unified "Mmmmm". Smoked featherblade beef, roasted garlic & béarnaise, Glazed smoked duck & duck neck beans, Roast pork rib eye, mint chimichuri & burnt baby leeks all layed out on platters before us. On the side were accompaniments of charcoal buttered Swiss chard, slow cooked shallots & raclette mash. Ready. Set. Go! Although I found the beef a slight let-down in tenderness, all was made up by the smoked duck. No steak knife was needed on this occasion and it went down faster than 1998 Monica Lewinsky. 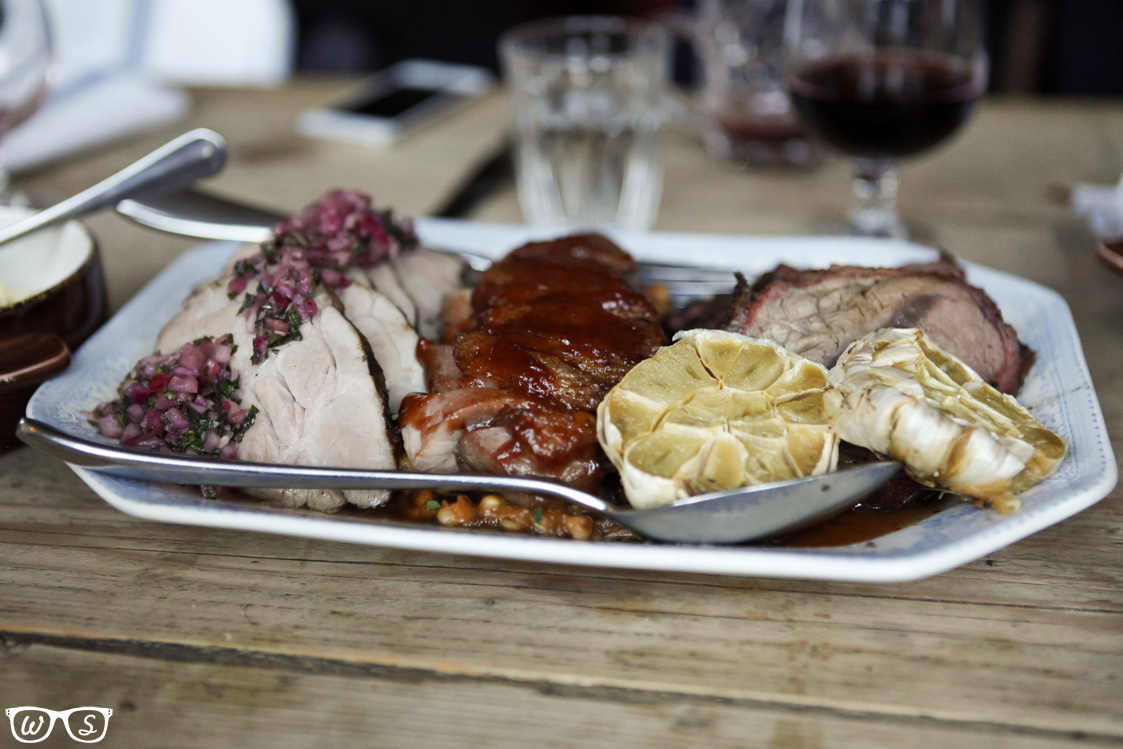 A feast for meat lovers. Not vampires or first-daters. 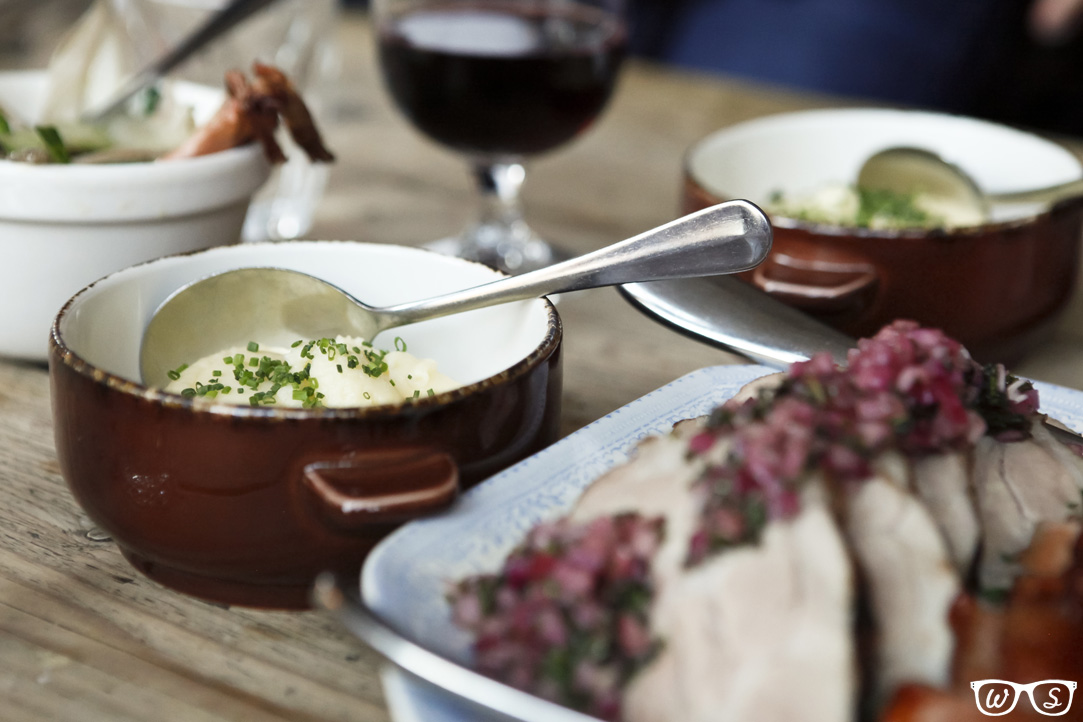 There weren't any awkward silences when it came down to the last few pieces of meat, nor the giant bulbs of garlic. If I was to whinge about anything, I think there could have been a bit more greenery to sort out my guilty meat 'n' potato loving conscience. My pescatarian friend found her main of Blackened pumpkin, tahini, flatbread & dill pretty lacklustre. A crying shame, when their only main fish dish contained meat in the sauce - granted it was bacon, and bacon goes with everything, right?

I doubt anyone goes to Smokehouse to try their desserts, and it was more obvious than expected. The sharing portions of Rosewater trifle with Turkish delight and Chocolate orange tart were very tiny but in hindsight probably just enough to end on a sweet note. It wasn't long before we had to vacate the table so a quick glance and nod to the guys and it was Whisky time. I have a tendency to lean towards a cask strength or Japanese variety but their list featured Mackmyra Bruks, a light and fruity Swedish single malt - so I tried that. Who knew vikings had a penchant for a nice dram?! 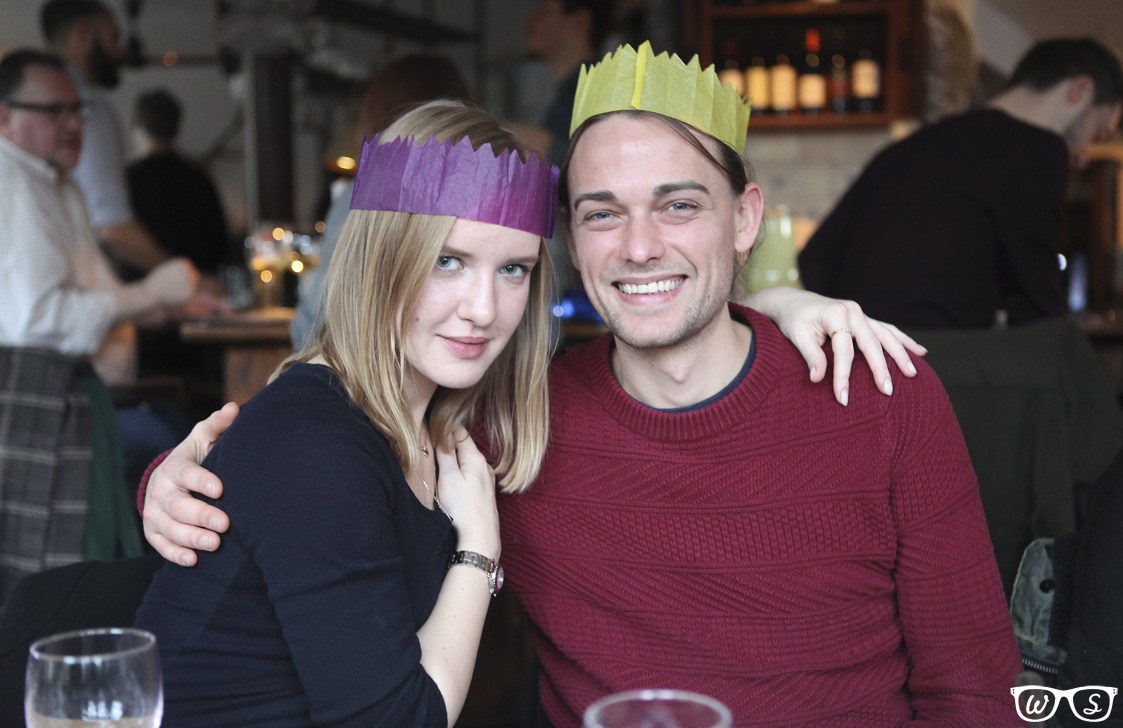 Good friends coming together for Xmas.

Overall, I've gotta say Smokehouse has got me wanting to come back for more! Service plays a bit part of the experience and their friendly, approachable and knowledgable staff shone brightly. It was a bit of a shame our last round of drinks took more than 15mins but otherwise it was bang-on! Sustainability plays a big part in their sourcing of meat and produce, but also their wine list. All wines come from within the EU and only from smaller, family-run producers. It's nice to see someone's out there looking after the little guys.

Everyone has their favourite meat sauce, whether it be some Classic HP, or Mad Dog's 357 Ghost Pepper Hot Sauce, but when I asked Head Chef Neil Rankin, he replied...

"if the steak or meat is good enough I personally don't want any condiments past Maldon or kosher salt but we serve a kimchi hollandaise with all our steaks. It's my favourite thing to serve because it adds a umami boost to a traditional steak sauce."

British Winters might be known for their Sunday roasts but this Summer I'm coming back for Neil's barbeque!