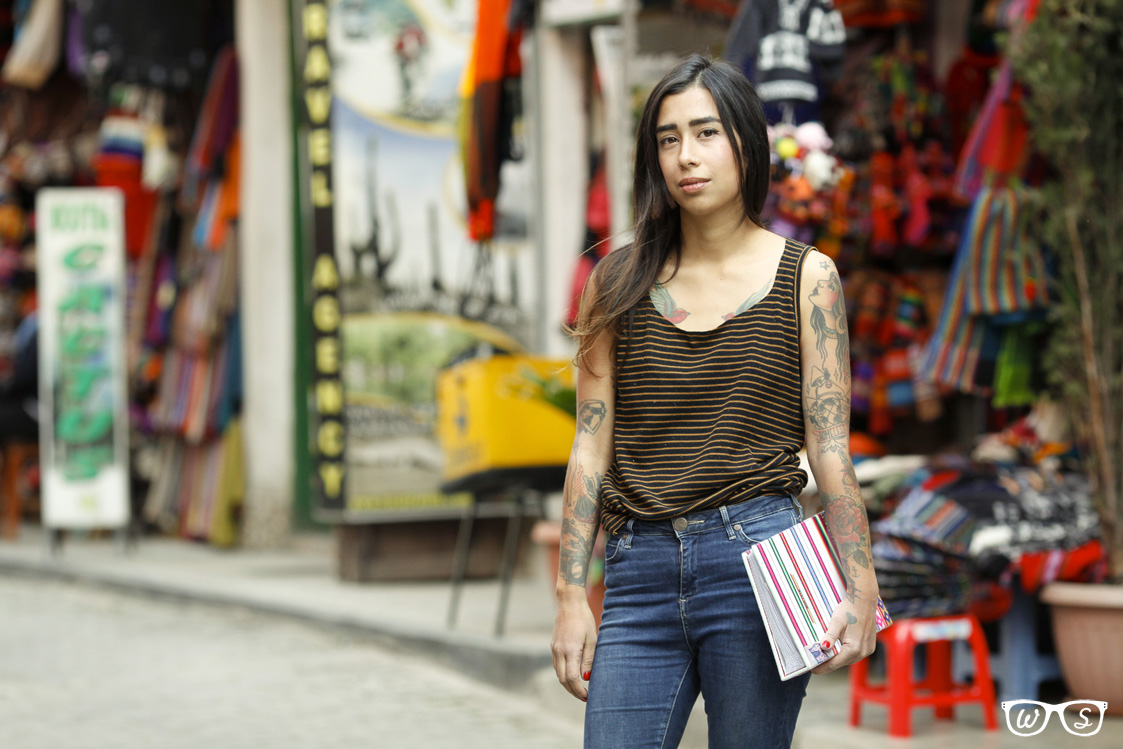 Being on the road is a pretty magical feeling. An opportunity to reflect on times past, present and future. My journey through South America this year was as much of a thrill-seeking journey as it was a soul searching one. Much of the thrill revolved around the notion that with so much freedom, many of my actions would have consequential reactions. As I sat inside a Bolivian prison cell in the early hours of a Tuesday morning in July, I remember pondering how my actions that night would change my future. I won't bore you with the details of why or how I ended up there, but suffice to say I wasn't locked up alone. My comrades were a group of fellow travellers, one of whom was a tattoo-clad Bristolian - Merrick.

When in Bolivia, many travellers are either heading north to Peru, or south to Chile. Merrick and I were both headed north and destined for La Paz - a city of high altitude and highly pure cocaine. Without a bank card to my name, I was forced to spend some time waiting in La Paz until a replacement arrived. In that time, Merrick introduced me to Cécile Pages.

At first, meeting Cécile seemed trivial. Little did I realise that she was destined to (like many people before me), scar me for life. It's not a mental or masochistic scarring I speak of but scarring of the best kind. Cécile is a travelling tattoo artist or as I like to put it, a 'Suitcase Artist'. 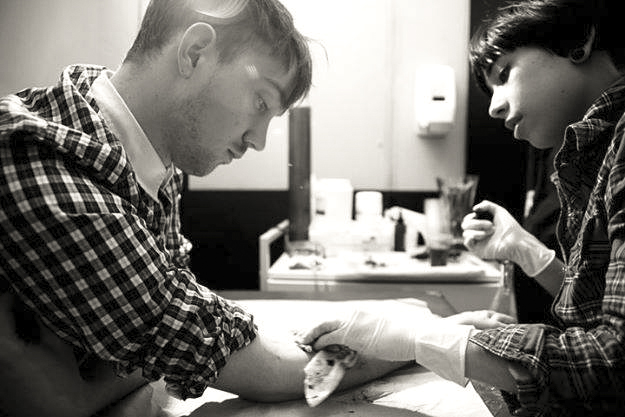 Spawned into a family of exceptional creative ability, she moved from Reunion Island to Toulouse and then finally Montpellier at the impressionable age of 8. Her family tree of creatives extends to her cousin Anna, who now runs her own design studio in Paris to another cousin, Vince, a fellow illustrator and tattoo virtuoso working out of his own studio, Nuit Noire in Geneva. 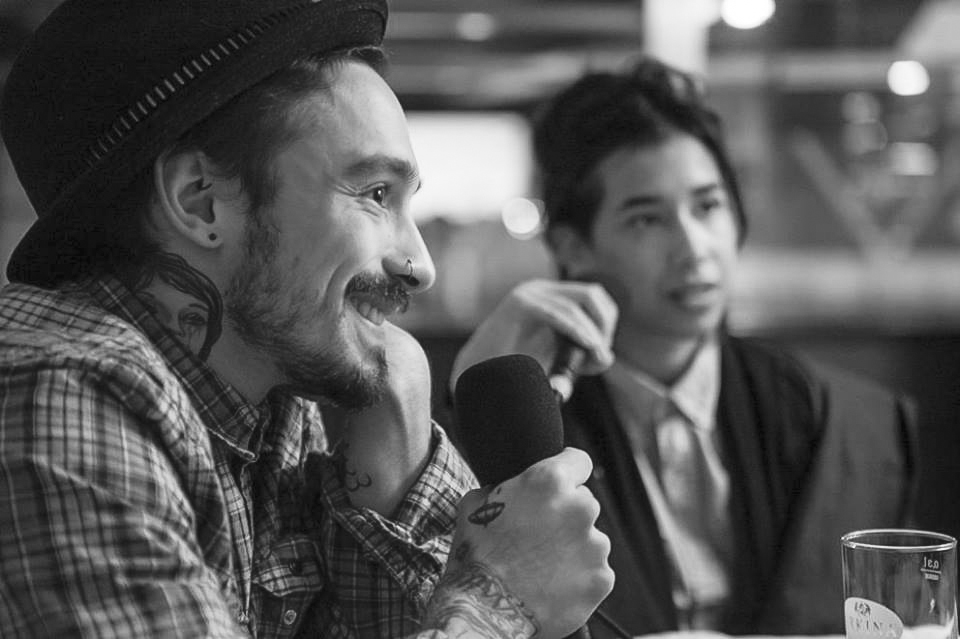 At just 24, her relatively short career has seen her pop up in studios all over Europe & South America. An apprenticeship in Paris with Rude at 23Keller, learning a neo-traditional style was where it all began. In this time Cécile's line work tended more towards 'new school' or what she describes as "curvy". Cologne in Germany was her next calling when Jens Wuchenpfennig took her under his wing at Seemann Taetowierungen, where her lines became more and more solid… "straighter". To describe her style during that period, "I used to add bits of colour here and there, leaving huge areas of blank space to add light to the tattoo..same with black, just in bits". These days, Cécile's lines are much bolder, while her colours are distinctively more solid. With confidence in her own style and technique, she explains...

"Nothing really matters to me anymore, I don't want to impose myself rules. I might go back to thinner curvy lines..why not?!"

In 2013, Cécile was drawn to Geneva to join her cousin, Vince Pages in the opening of his studio Nuit Noire. Once snowboarder turned full-time artist, Vince's style is impressively clean, taking a more conventional approach to traditional tattooing in comparison to his cousin. After a short stop in Brussels, Cécile did a quick stint at The Circle in London, which gave her the confidence in her own abilities to the point where she took a 7 month sabbatical back in her homeland of Reunion Island. Life from a different perspective was a key step in her growth personally as well as creatively, and although not tattooing for the most part, ceramics became her main outlet. 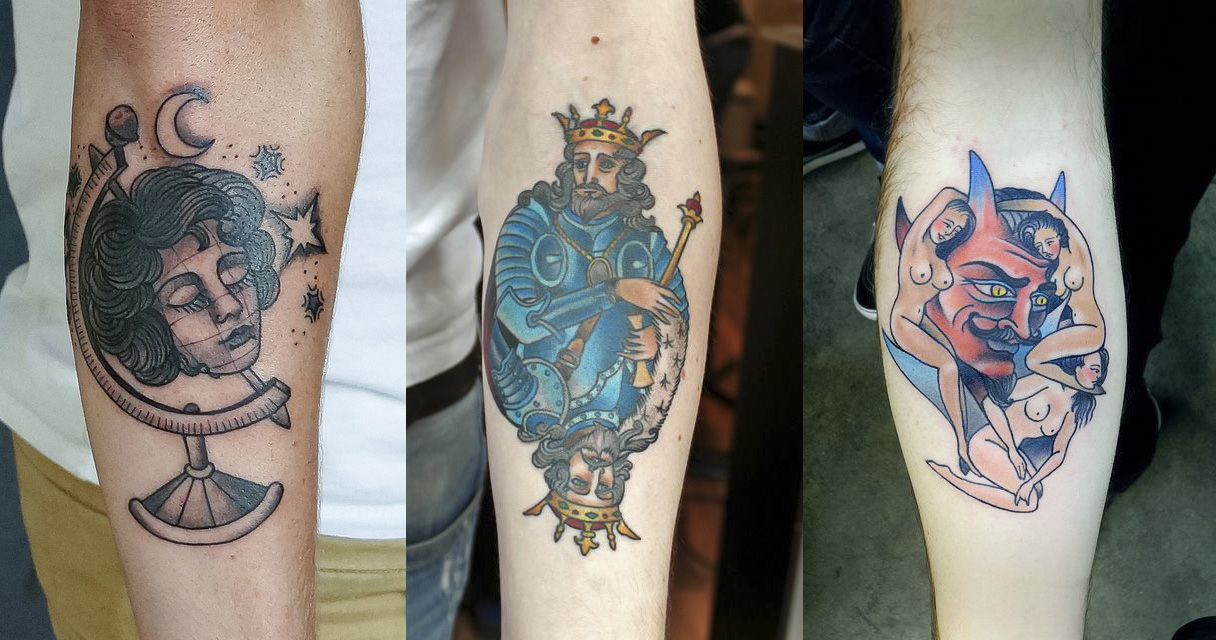 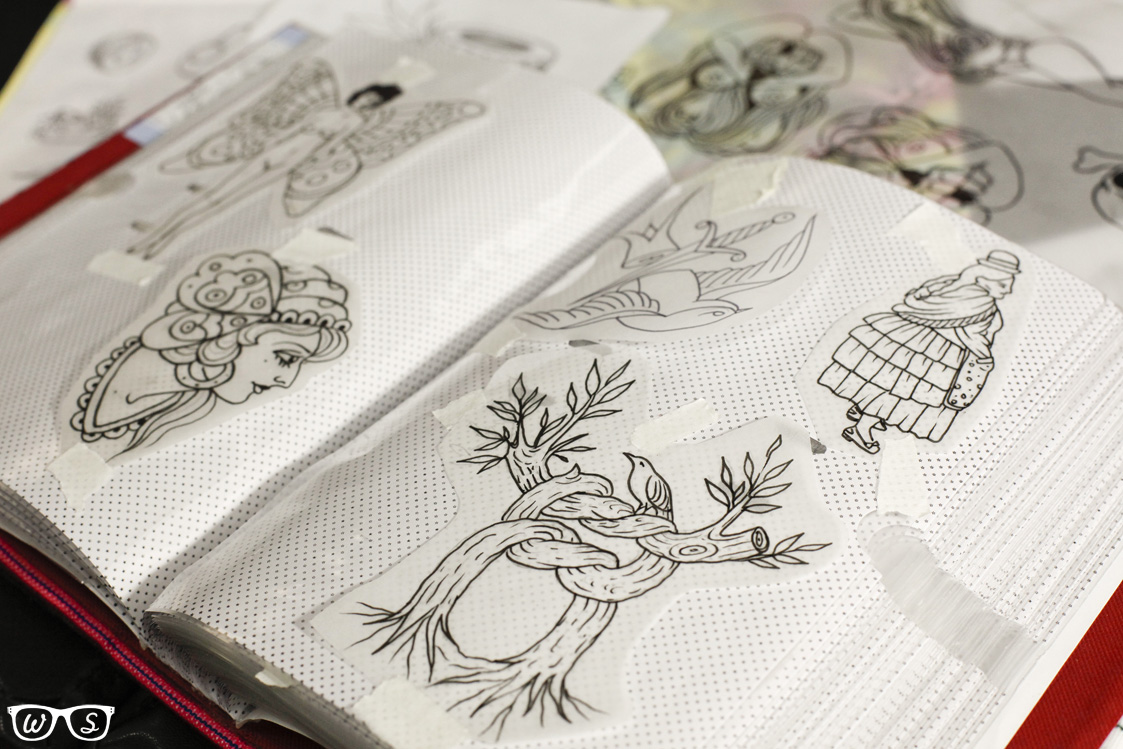 A collection of sketches - goes everywhere she goes

"Whooooaaahoooohh! When my baby…when my baby smiles at me I go to Rio…de Janeiro!". Her move to Rio this year started off a bit like Peter Allen in a Hawaiian shirt shaking maracas. A guest appearance alongside a well-known and superbly talented artist was set to be the perfect beginning to her South American invasion. But instead of being allowed to flourish, her creative freedom was stripped from her, leading to a feeling of entrapment. There was only so much Cécile could take before she decided to flee and decide to work with her own tools in the beautiful surroundings of a grand house in Cosme Velho. With 'Big Jesus' literally looking down on her, Cécile found a harmonious place to be free once again with the aid of social media networks like Instagram & Facebook she found and produced some of the best work in her career. 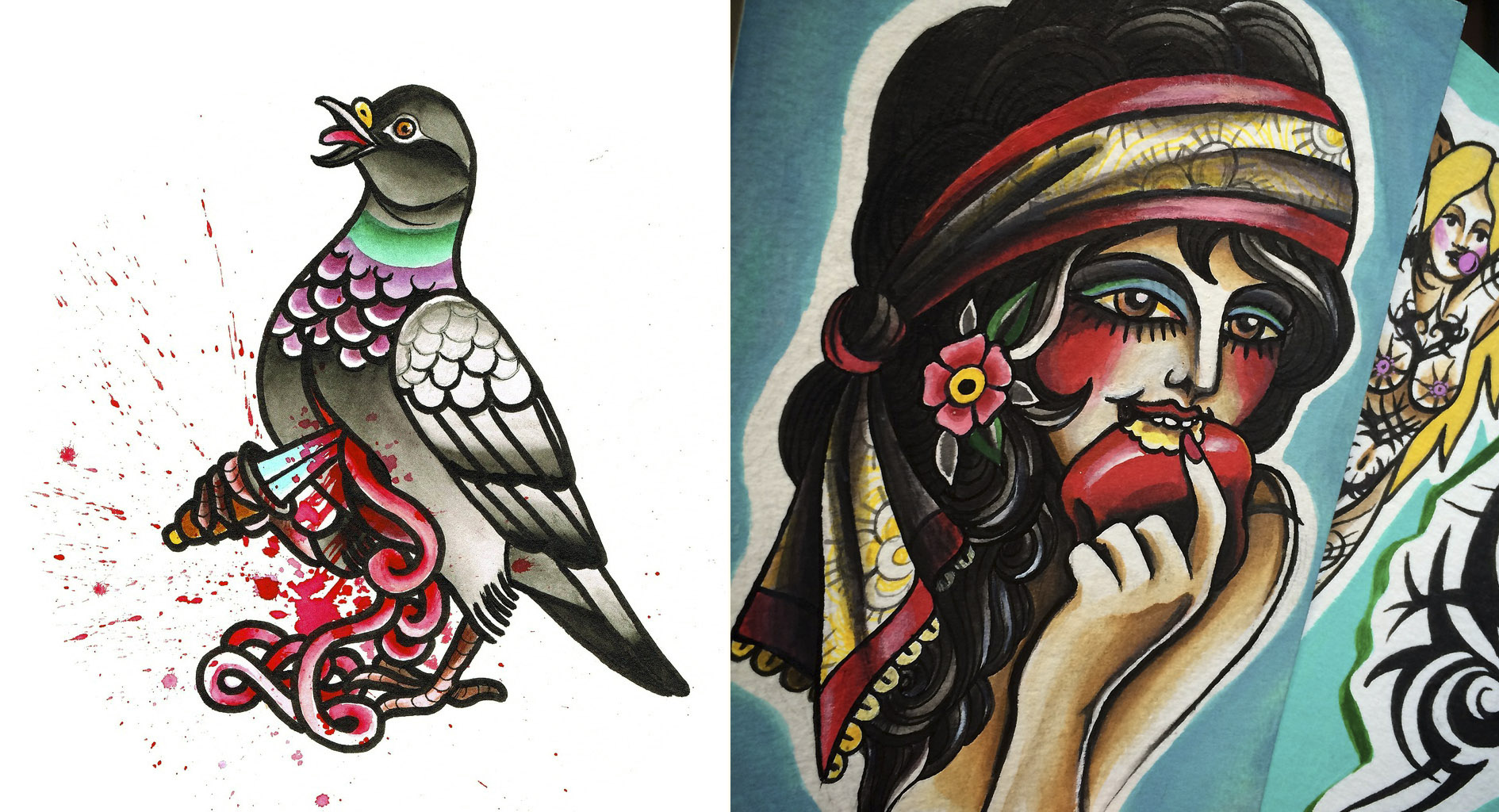 Without a doubt the best thing about being a traveller is the people you cross paths with - maybe not all of them though! Having a heightened level of personal openness leads to relationships blossoming at über-speed, which can sometimes open new doors. For Cécile, this door opened in Geneva. Tico Acosta, of Eternal Tattoo in La Paz was in town and the two met through her cousin Vince. A year later, Tico got word that she was in South America and proposed she join the team at Eternal for a guest spot. Accepting was "the best decision ever" for Cécile and during a trip to the Santa Cruz Tattoo Convention, was introduced to the Chilean Taller34 crew of Santiago. With a grin on her face she confessed...

"It was love at first sight."

Since my path crossed Cécile's in La Paz, which strangely came about by being jailed in Santa Cruz, she has set up more of a permanent base with Taller34. For now it's where she's unpacked her bags and established a connection, but who knows what could be waiting for Cécile just around the corner? 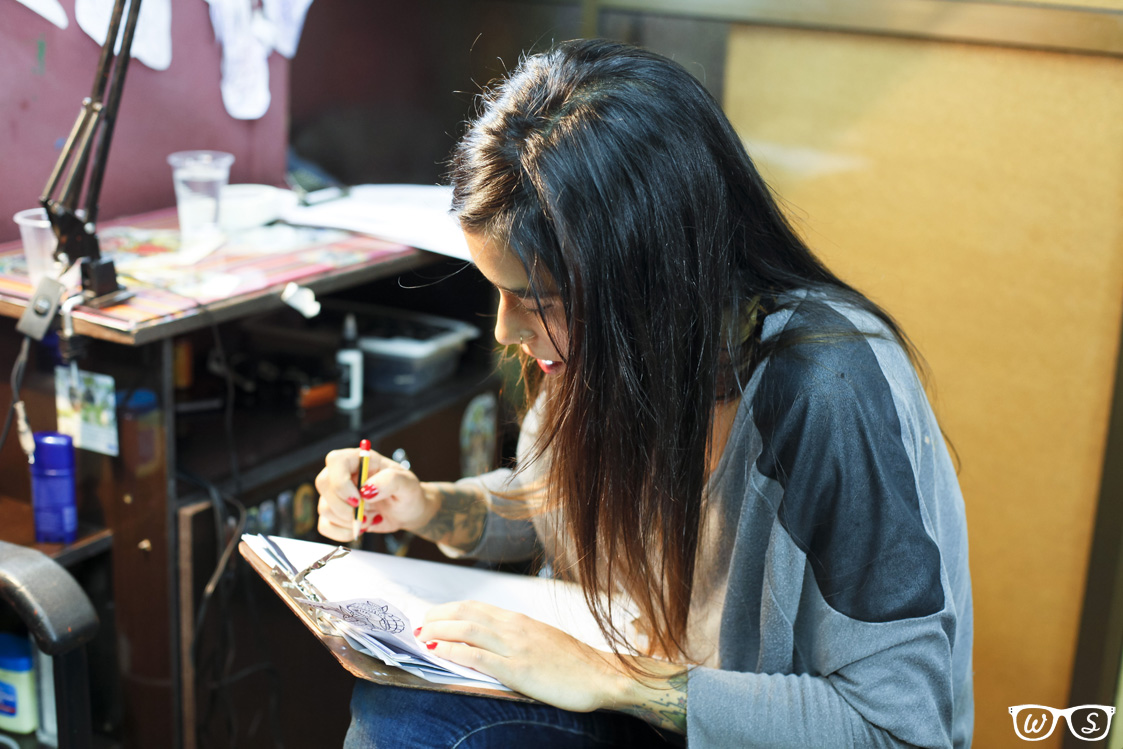 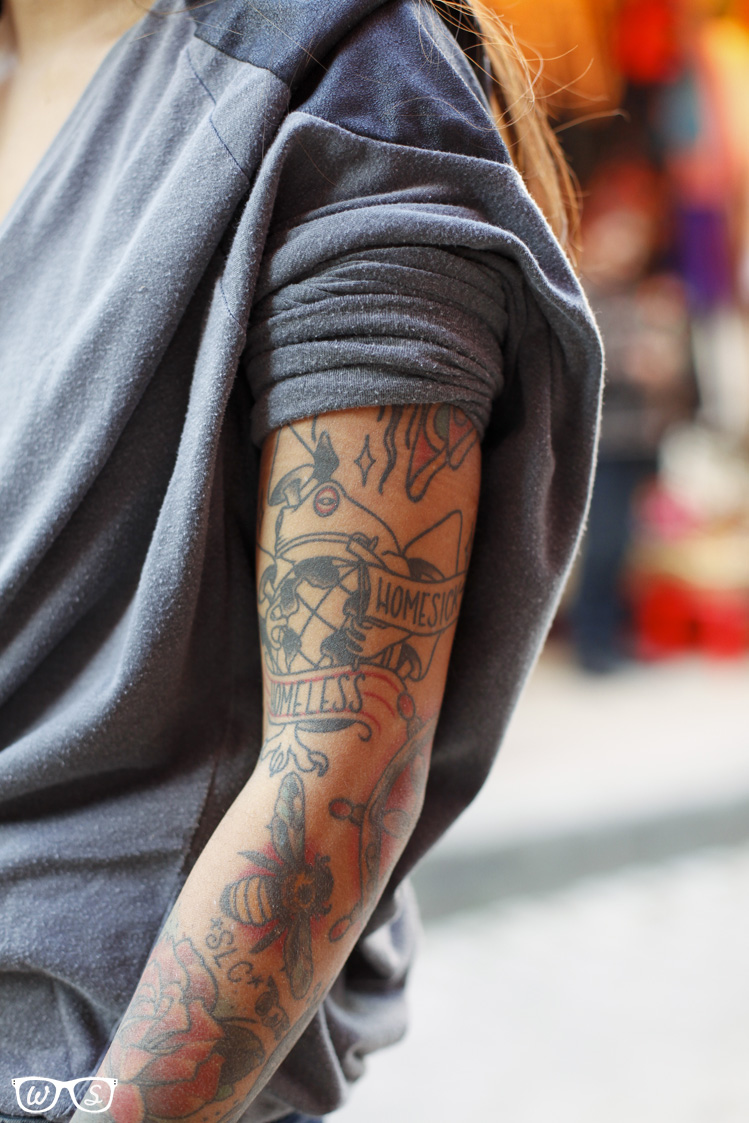 Homeless & Homesick - sums it up

With access to the web, an artist can be influenced by others, thousands of miles away at the swipe of a screen or click of a button. Sure, there's artists like Eli Quinters and Simon Erl that get her senses tingling, but Cécile takes on a more personal reception of influences in the form of her surroundings. A high sensitivity to colours, textures & materials form a basis of her style, while all things natural and spiritual play a major role.

"One colour nuance, one texture or detail can literally change everything. Upgrade the art piece from okay to unbelievable. That's what I'm into!" 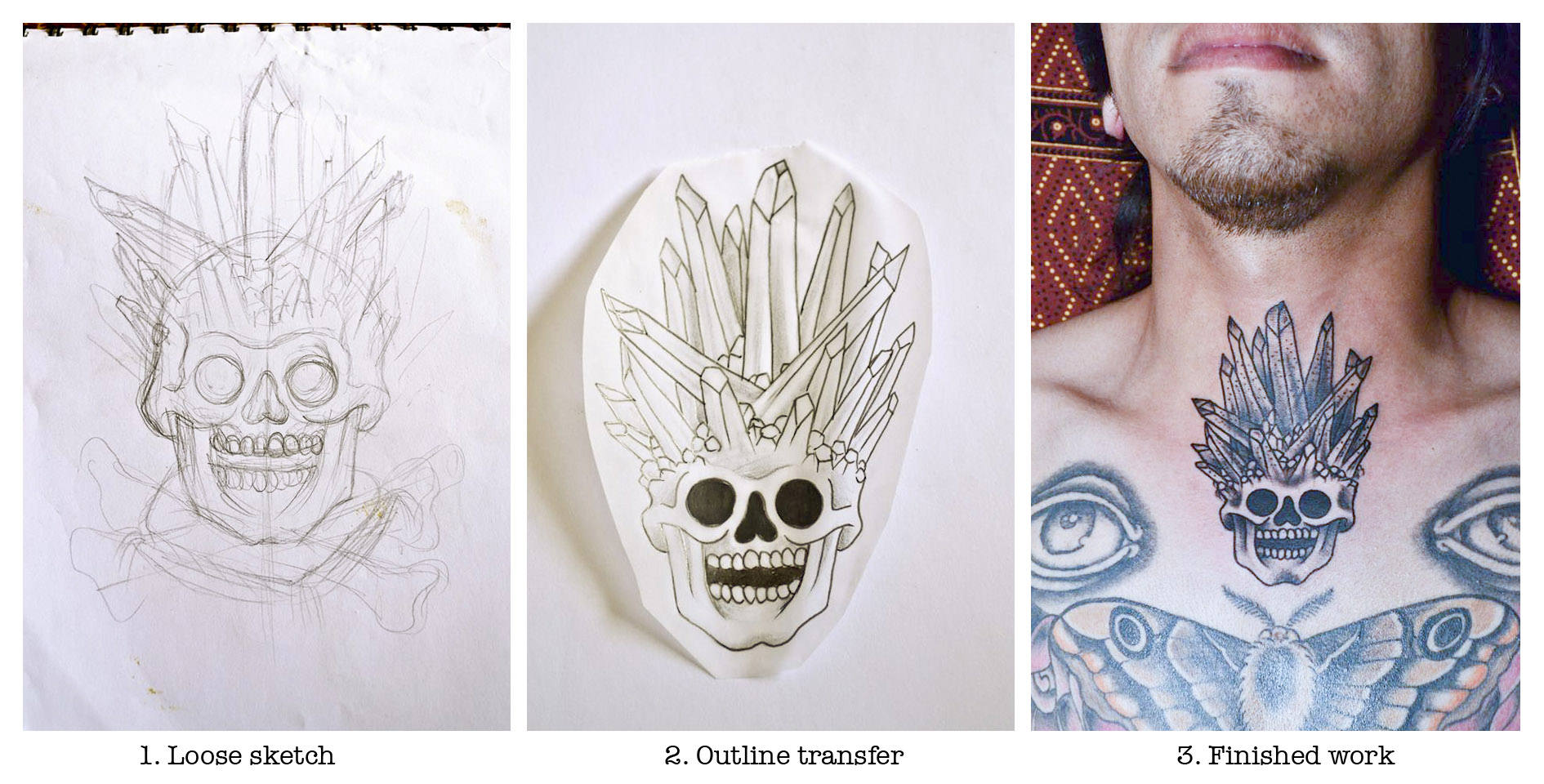 A working progression by CÉCILE PAGES 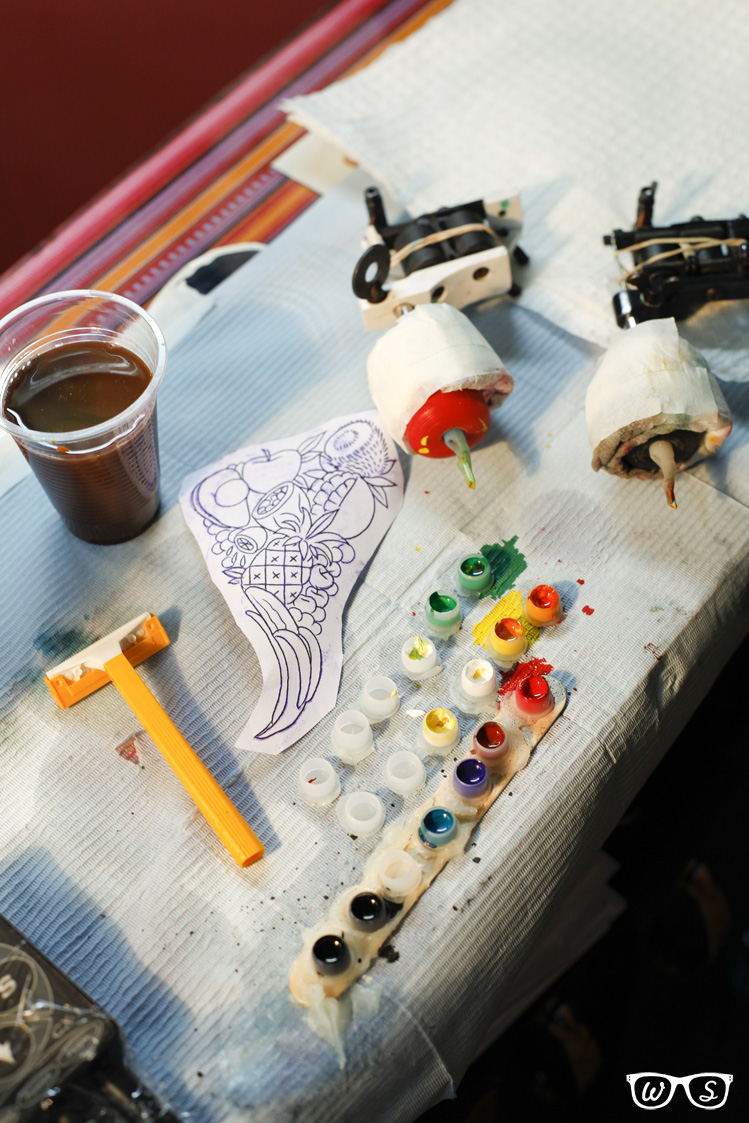 Cécile's transition from Europe to South America was nothing but a positive one. The ladies she drew smiled more, the colours more vibrant and the overall tattoos were designed to make people happy. When I asked Cécile to design a tattoo symbolic of my journey through the continent, it was little wonder it involved fruit when just days before she tattooed Merrick with a proud pineapple head - quite literally.

Since Brasil, I eat a lot of fruit everyday. I think they are the answer to a lot of pain and disease in this world. The least I can do is a tribute to them.

There's something about fruit that's so primitive and naive, yet humourous at the same time. I think that's what Cécile enjoys playing on most. For me, a tattoo is quite a personal thing, expressing a form of artistic individuality and yet having meaning at the same time. My time across mainland South America was filled with mixed experiences, undefinable by separate countries or cities. Instead my representation of South America comes in the form of segments. Each segment made up of nature's fruits, yielding vast dashes of bold colour and flavour. I love it! 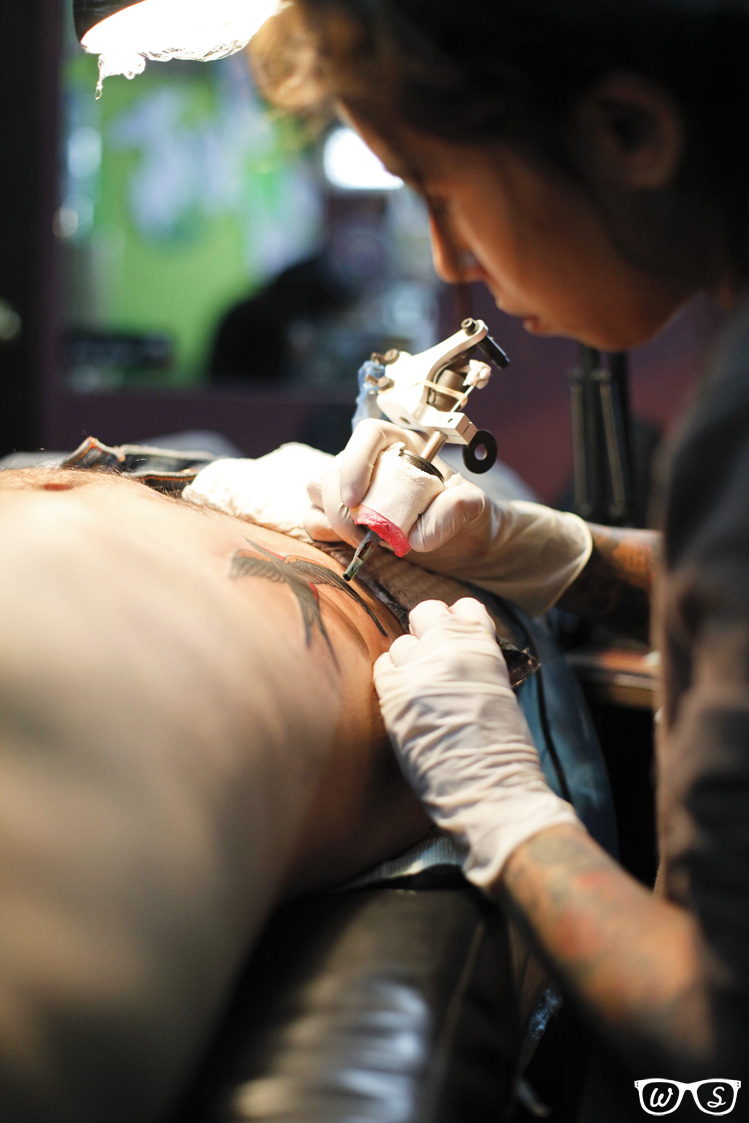 When asked if she'd be returning to London to tattoo again… "I'd love to! I think in Europe, London is THE place for tattooing… So many extremely talented and creative people, but here in Santiago, I am surrounded by lovely people. It's family for me! I really feel at home in South America. My whole life, even in the island I was born, people were asking if I was South American. Every day. All the time! I feel normal here… no more questions!"… It sounds like this Suitcase Artist has found herself a home at last. Let's just hope it's not the last we've seen of her in London.

One day in Paraguay