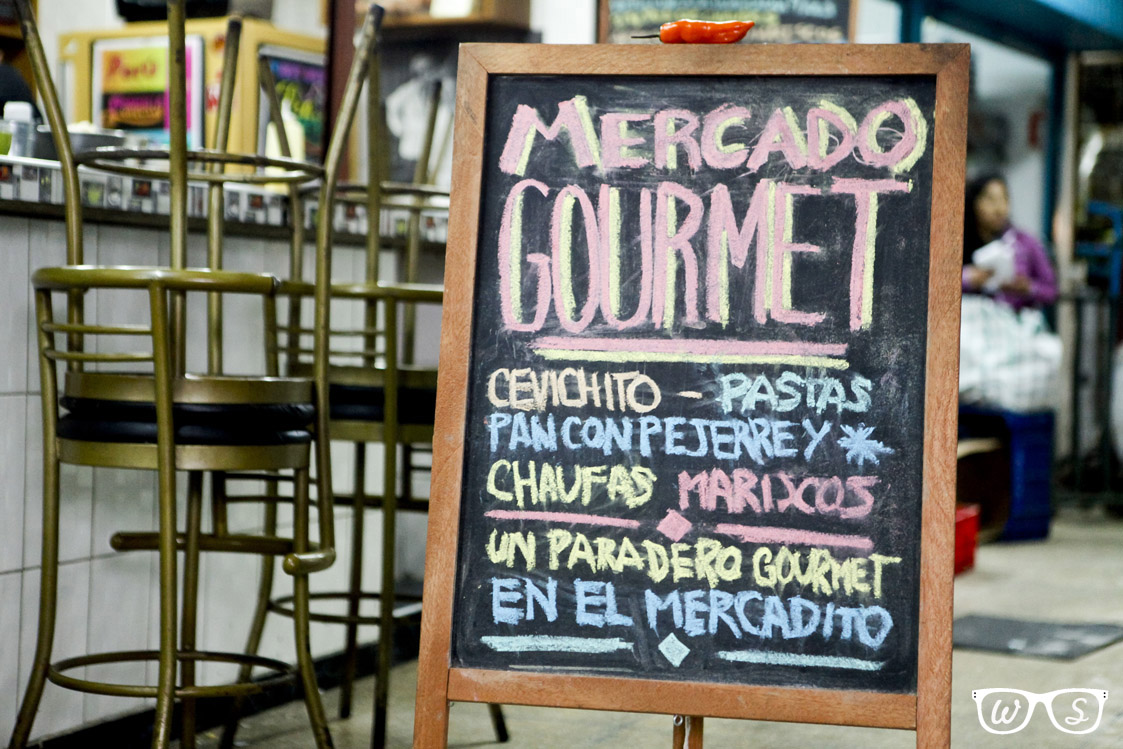 Closing time at Mercado Gourmet...No menus, just daily fresh specialities on the board.

When entering a new city and check into a hostel, I'll almost always ask for recommendations on local cuisine, cheap and typical. I'd heard many things about Peruvian food, and at the mecha of its culinary endeavours was Lima. When you see ads for chef institutes and food tours for over US$300 it must be a big deal. Peru is typically known for ceviche, its bizarre use of 'cuy' or Guinea Pig and adopting a fusion from many other cultures. I'd already had an abundance of ceviche on the coast in Paracas so was looking to find something with more a street food vibe. Who better to give advice on food than a local, and to my luck I'd met and became bed bug buddies with three French/Swiss girls studying in Lima, while in Huacachina. Their hot tip: go to Mercado Uno.

Stepping into Mercado Uno, I was surprisingly underwhelmed by the size, comparing to San Pedro Markets of Cusco, and the San Camilo markets of Arequipa where I'd indulged in Sopa de Quinoa & Lomo Saltado on several occasions. Considering the size and diversity of Lima, I was expecting something of grand proportions. My first arrival was around 11am and I didn't notice anyone eating. After farewelling some compatriots, I decided to come back around 1:30pm. I walked past one, two & three seafood stalls who were dishing up fresh fish & seafood ceviche but I noticed a crowd up ahead so investigated. There I found Mercado Gourmet. It must have been good considering the number of people huddled around one small area. 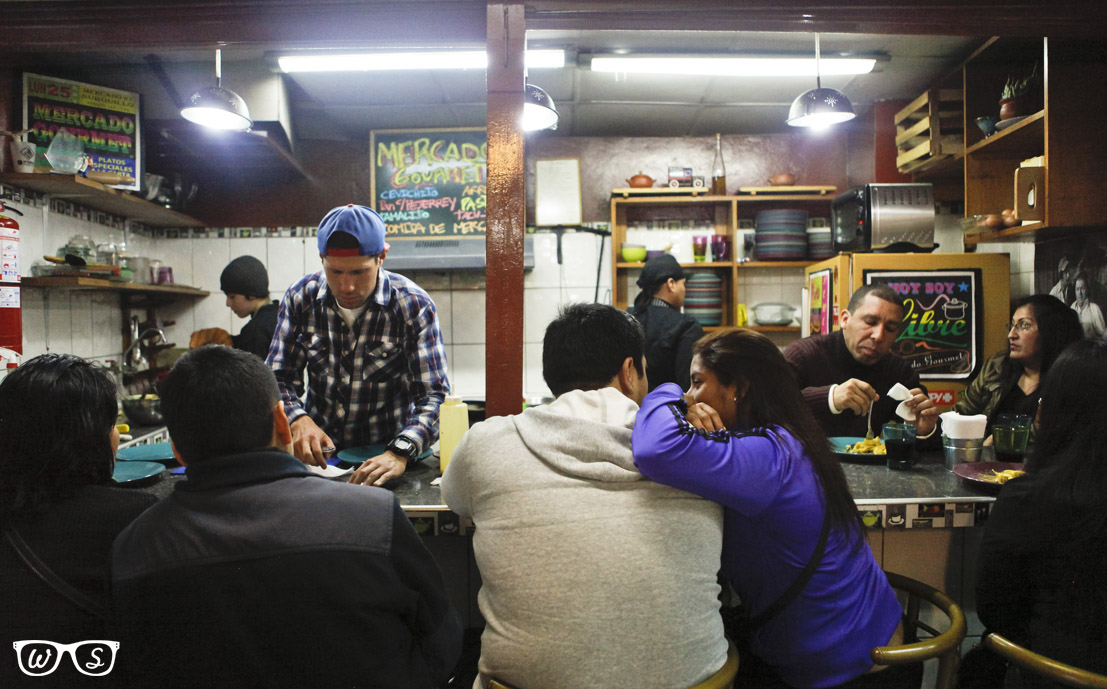 Diners eat and chat while Diego skillfully prepares the next course

I observed. No, first I smelt. Instantly I felt a warmth of rich aromas of garlic, spices and hot oil. The chef, was standing before an audience, plating fresh fettucini with stir-fried marinated beef strips, while also preparing fish burgers with the most careful precision. This was his famous 'Pan con Pejerrey', a freshly toasted bun, huancaina sauce, lightly deep-fried Pejerrey fish, and an onion salsa. It was busy, and as I had all the time in the world I observed while people shouted orders to the chef which he wrote down on a list. "Uno pan, dos, tres, quatro pan", he counted as he pointed around the audience. After a moment of indecisiveness I ordered the Fettucini con Mariscos containing scallops, calamari, prawns and limpits, in a huanchaina sauce with grated parmesan cheese and herbs. Huancaina is a traditional Peruvian sauce, often served over boiled potatoes, comprising of yellow chilli, onions, garlic, fresh white cheese and milk. I later found out that Diego the chef likes to add a dash of Pisco to his recipe. It's no wonder it tasted so good! 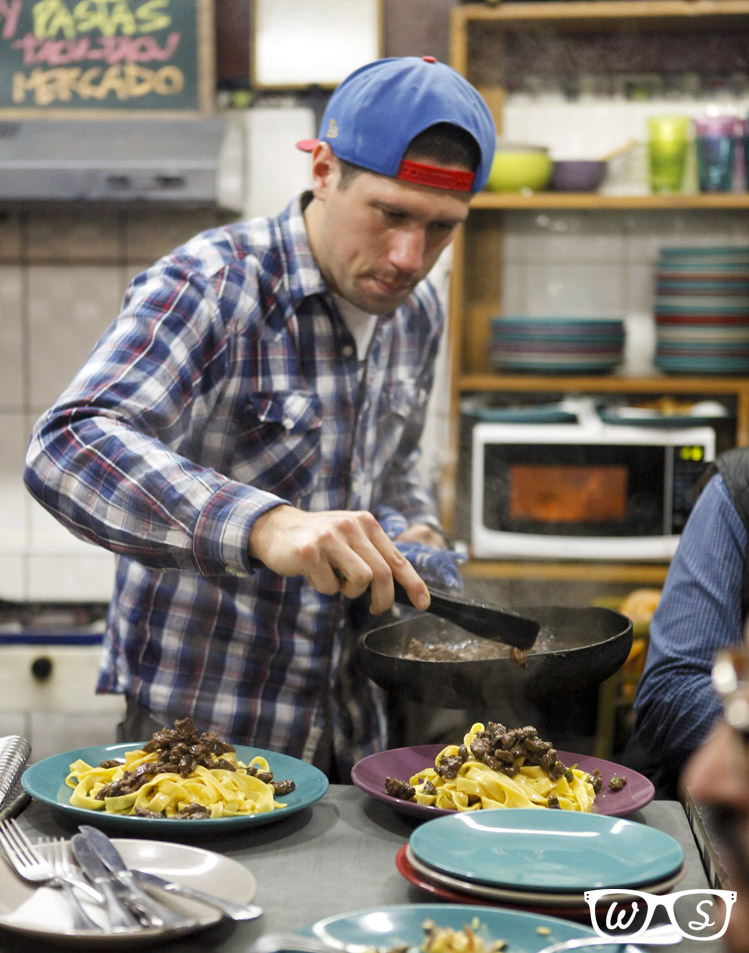 Diego working his magic for the audience

Diego, 26, dressed in casual clothes and a backwards Superman cap, was not what you'd expect to see dishing up tasty Mediterranean inspired treats. Despite being busy, Diego still managed to charm his audience, and I noticed that not one customer was missed when asking if they enjoyed their food. With 10 years kitchen experience in some of the best restaurants in Peru, Ecuador and Buenos Aires, Diego exuded a passion for his food. This was obvious. For me, what separated Mercado Gourmet from any other food I'd eaten in South America was the freshness - both into the pan and onto the plate. Being inside the market, you know the produce comes in fresh every day. His limited 10 portions of fresh ceviche is so good it usually sells out before lunch! 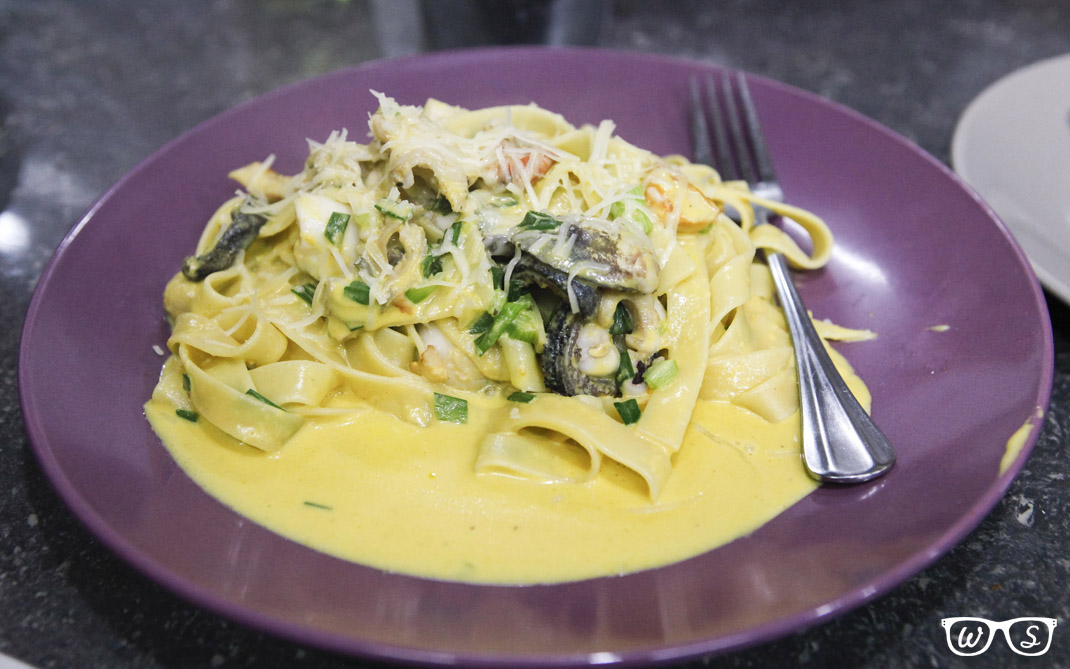 My Fettucini con Mariscos, just before I inhaled it

The blackboard replaces the menu and despite being fairly limited there's plenty to excite. '3 ti pos de chaufase' is an asian style fried rice containing three different styles of rice, seafood, beef & pork, while 'Tacu-Tacu de pairres' combines rice and beans into something almost like solid risotto and served with marinated beef. Neither of these two interesting dishes made it onto anyone's plate because he'd already sold out. If I was to go back I definitely would have tried the 'Pan con Pejerrey'. Instead I'm going to have to try to replicate it myself. Who know's, maybe I'll open my own Mercado Gourmet in London. All I do know is if you find yourself in Lima some day, you have to take a seat at the 'Chef's Table' of Mercado Uno & make sure you say hi to Diego for me! 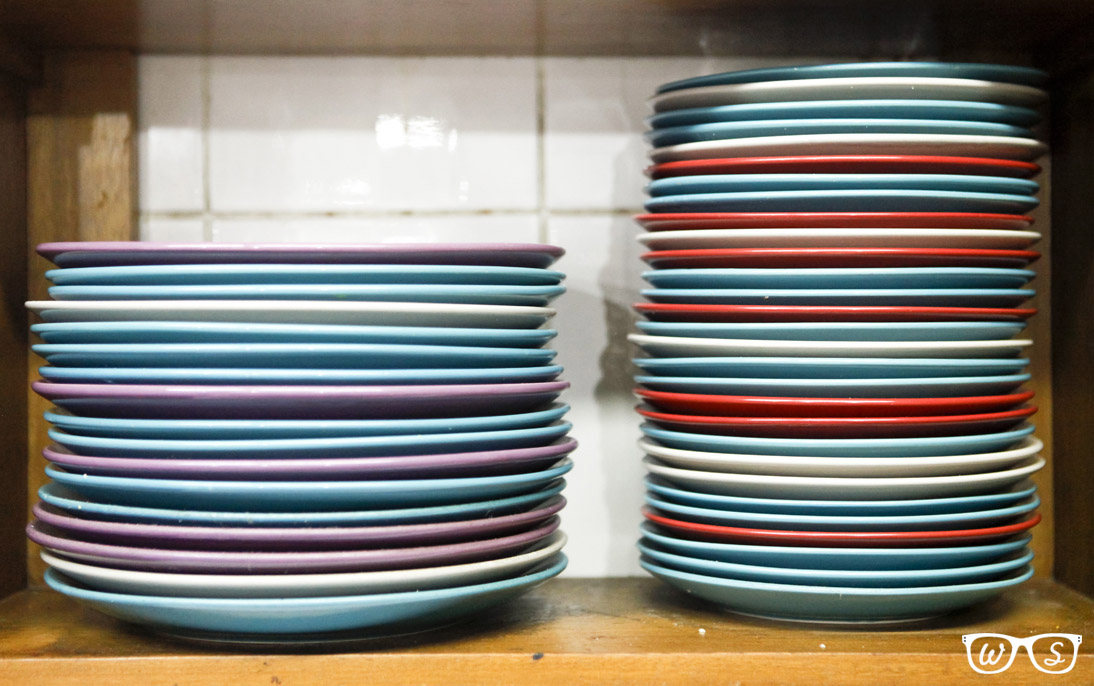