It sounds kinda ridiculous that people believed that a God, albeit the Sun God could be born on a remote island of Bolivia, but after spending just one day here under the harsh rays, I'm beginning to believe it might be true.

For anyone not clued in, Isla Del Sol is a 70-sq-km island on Lake Titicaca, the World's highest lake at 3,800m above sea level. Amongst it's stunning beauty, it also contains some of the most ancient Inca ruins found anywhere.
When I set out on the 'gringo trail', I hadn't even heard of this island until it was mentioned by a fellow traveller. "You really must go! You will love it!", she proclaimed, and it certainly didn't disappointed.

Ignoring other travellers movements I decided to get the 1.5hr boat from Copacabana to Parte Sur (the south port), and land in the largest town of Yumani. First glimpse as we docked were the infinite set of stairs winding up the mountain. If any of you know what it feels like at 3,800m, you'll know what I mean. I unloaded some extra baggage and stored it in Copacabana but still had no less than 20kg on my back and front in camera gear and clothes. Of course, I was wearing my heaviest and warmest clothes to ease up space in my bag. Then the sun came out. I took a photo of the map at the bottom of the stairs and it's just as well because there isn't anther map in sight - at least on the south half. I didn't book my hostel as none are available online, as of course most have no internet to receive bookings, so I climbed. Using my trusty Spanish Phrasebook I shopped around until I got to the top and couldn't go any further. I don't usually trust Lonely Planet but Puerta del Sol seemed ok, and the lady said they had hot water (a complete lie).

Changed and dried I set off with a lighter version of my camera bag. I thought I was smart (as usual) and didn't bother checking the map and followed the most obvious path I could see. Wrong - but right - idea, as I ended up climbing Calvario, the highest peak in Yumani (3976m). The view was spectacular and there was a cool Paegen-looking stone circle but I had nowhere to go so back-tracked. Thankfully a lovely Glaswegian couple saw me and pointed me in the right direction and told me there were food places not far away.

Entering 'Parte Sur' (5Bs./ £0.45), I had graduated crops to my left with Cholitas picking soil as donkeys grazed. The path narrowed and the sound of 'eee-aww' echoed through the valleys. It then was followed by pigs squealing and sheep 'bah-ing'. I wasn't alone. 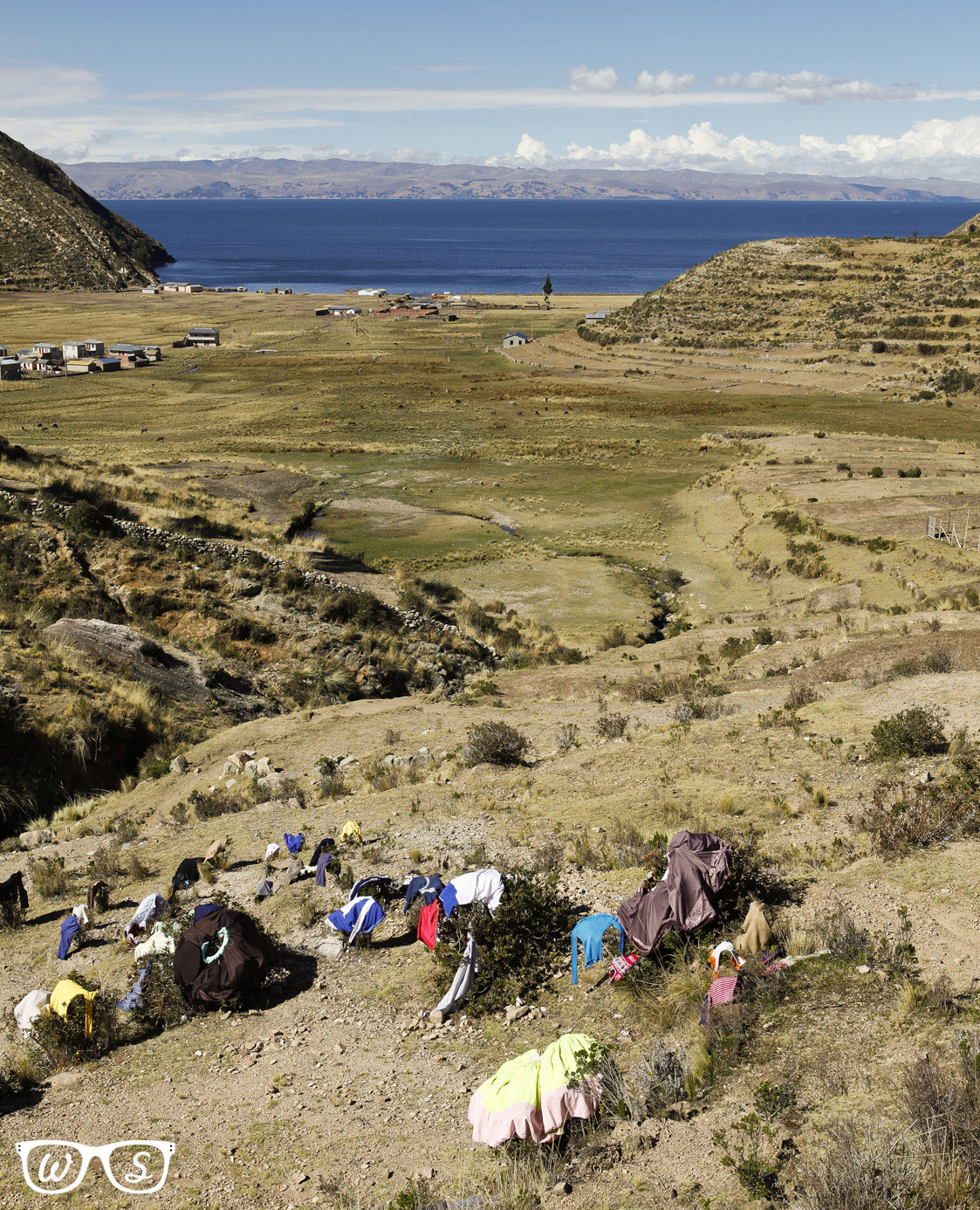 After paying another 15Bs (£1.34), I entered Comunidad Challa which makes up the rest of the southern half of the island. Distracted by the huts on the left side of the path and of course not using my 'map photo', I went left along the main path. The altitude does something to your hunger patterns and I was already starving by midday. I didn't want an avalanche from my loud stomach so I trekked on and on. Nothing. Nothing for a long time in fact so after a bit of cheeky name engraving into a rock, I went back to take the right route to 'Challa 1'. My map photo even said there was food in the next town so I picked up the pace. I tried to charge down but there were too many photos to be taken and it took me longer than hoped. The other thing that slowed me down were the school kids, just finishing school and all saying "hola" or even stopping to talk to me and have their photo taken (but only for a smell fee of course). 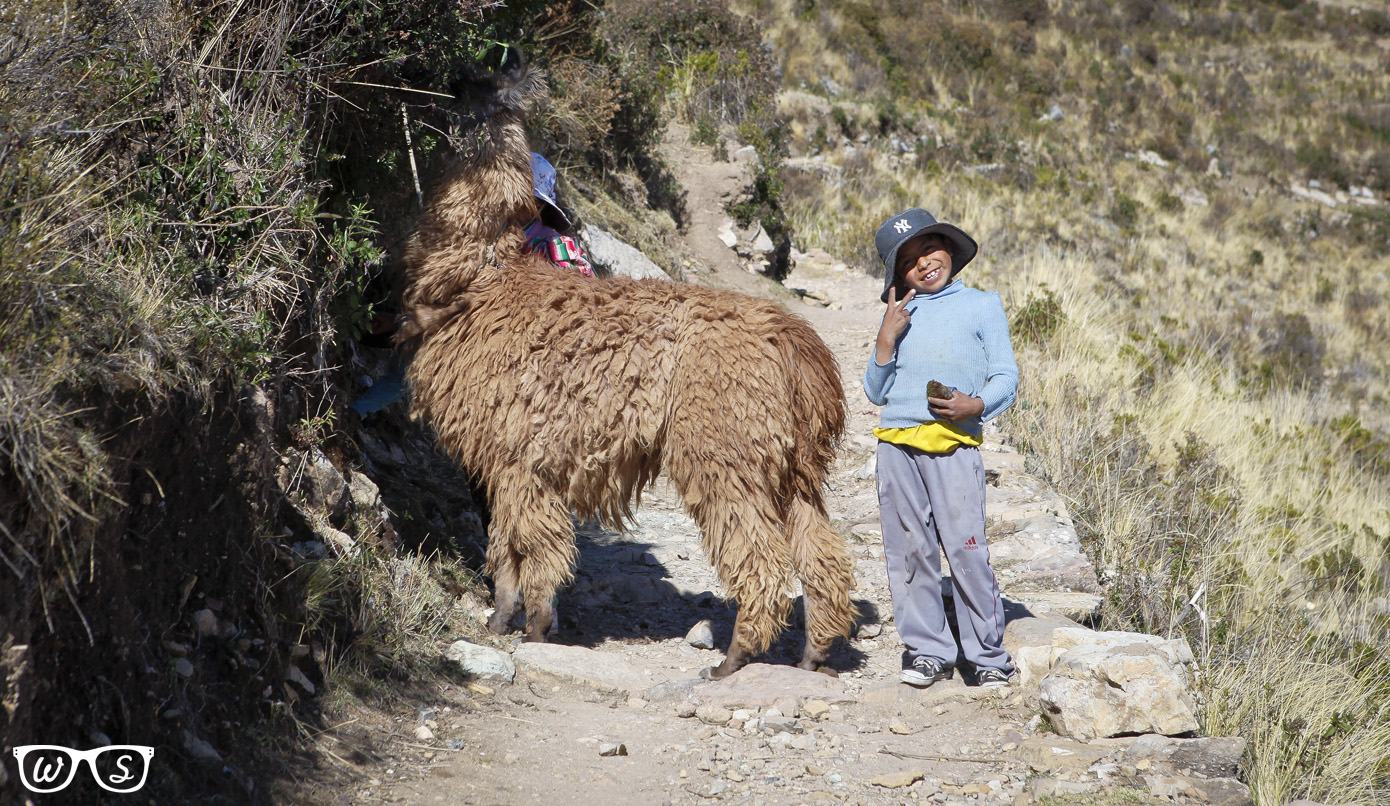 A cheeky young local boy poses, just after he stops throwing Llama poo at his brother (behind). I later paid him 5Bs.

Armed with only a 100Bs note, I virtually had no hope of getting it changed in a tiny town. The first kiosk I passed, I flashed my 'hundy' to the lady and all I got was a head shake. Coming over the mountain, Challa 1 Beach was in sight and I picked up my pace downhill, until a 7-piece band starts playing on the beach. WTF?! More kids stop to have photos taken but I flash my only 100Bs note so I walked straight past knowing they would happily accept. I make it, and the first thing I notice is pigs on the beach. Once again, WTF?! I made it to the next shop along the beach and flash my note once again and say "Cambio?"…"Si!". I wasn't going to die of hunger on a remote island! "Dónde está restaurante aqui?", I ask the owner pointing around the town. "No…Challapampa". That was at least 30mins walk in the wrong direction I wanted to go. 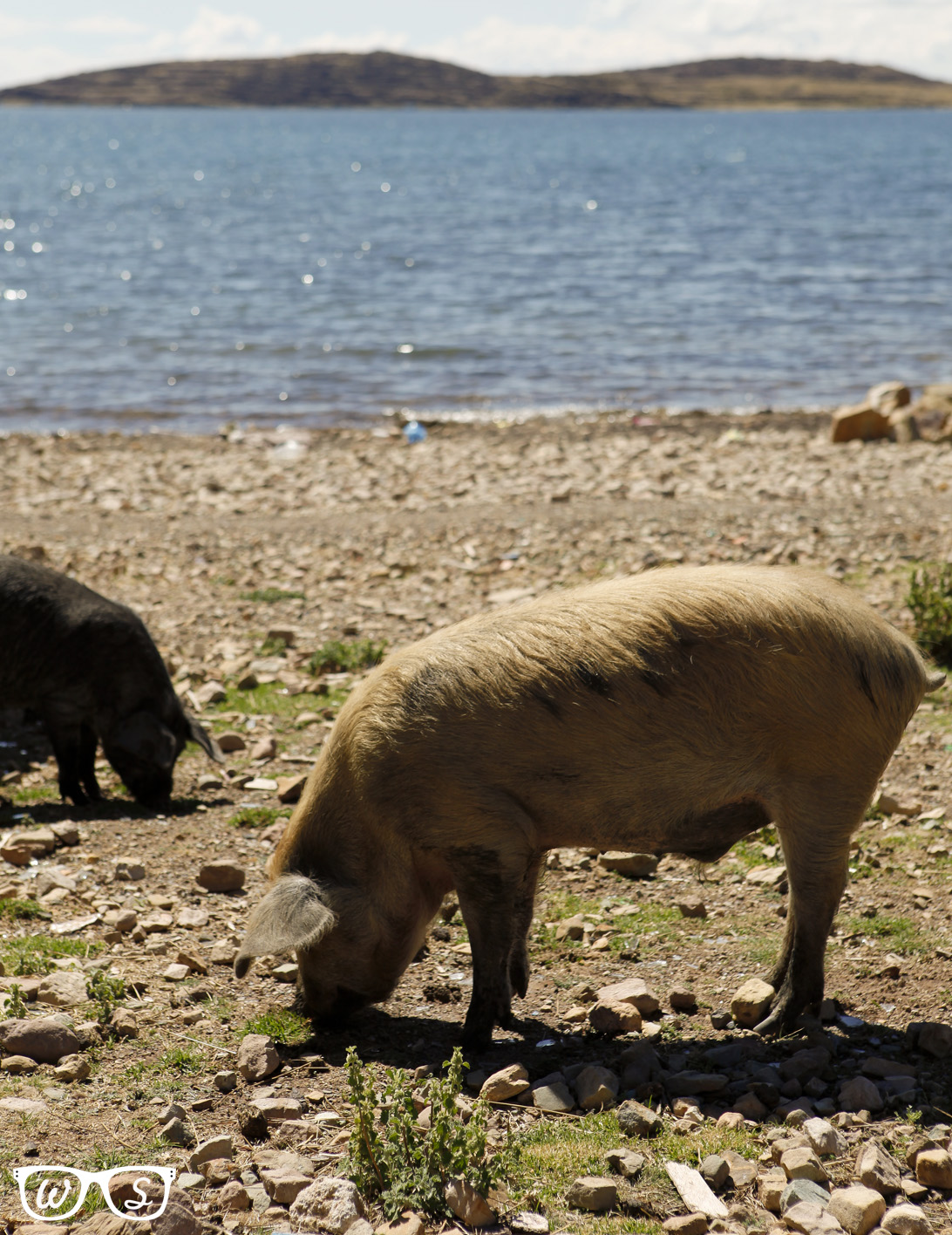 Pigs graze on Challa Beach. Apparently they like to eat seaweed.

Re-energising on my Twix and Coke, I got talking to a guy who was talking to the shop owner. He got in first with the "where are you from?" but it turned out him and his family live in Australia…Alice Springs in fact! Seemed kinda strange a South American guy and his family live in the centre of Australia, until I found out why. Luciano the father was a travelling dentist from Buenos Aires, bearded and wearing a traditional hat. His wife Carolina too was from Argentina. They moved from BA to NZ for 10 years, then to the Gold Coast, finally ending in Alice Springs for 2 years! He explained they'd been there 10 days already but what were they doing in Challa on holiday? Not on holiday but instead on a 3-4 month stay in Challa where his two kids would go to school and learn Aymara, the rural language of Bolivia and Chile. What?! Definitely one of the most interesting families I'd met before. How can anyone not love travelling when you have strange encounters with people with stories such as Luciano's?! 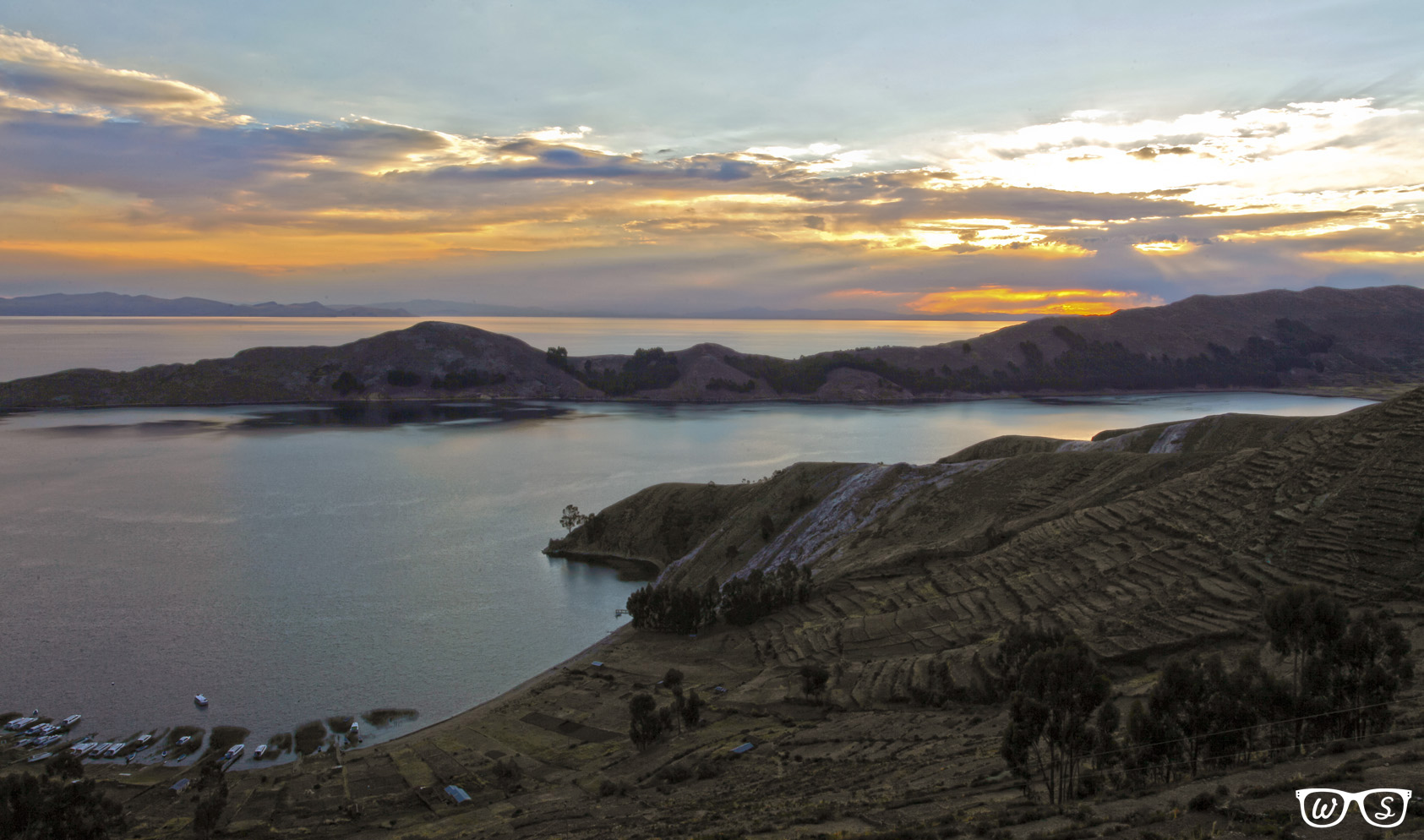 The amazing sunset over Lake Titicaca...All that was missing was a cold beer & maybe someone to enjoy it with (HDR)

Nearly 5 hours after setting off, I eventually made it back to Yumani, got some decent food into me and managed to catch the sunset over the lake from my hostel terrace.

Tomorrow involves a boat to Parte Norte, then a full length trek of the island. I'd better get some rest… if only my farm animals buddies would stop partying!