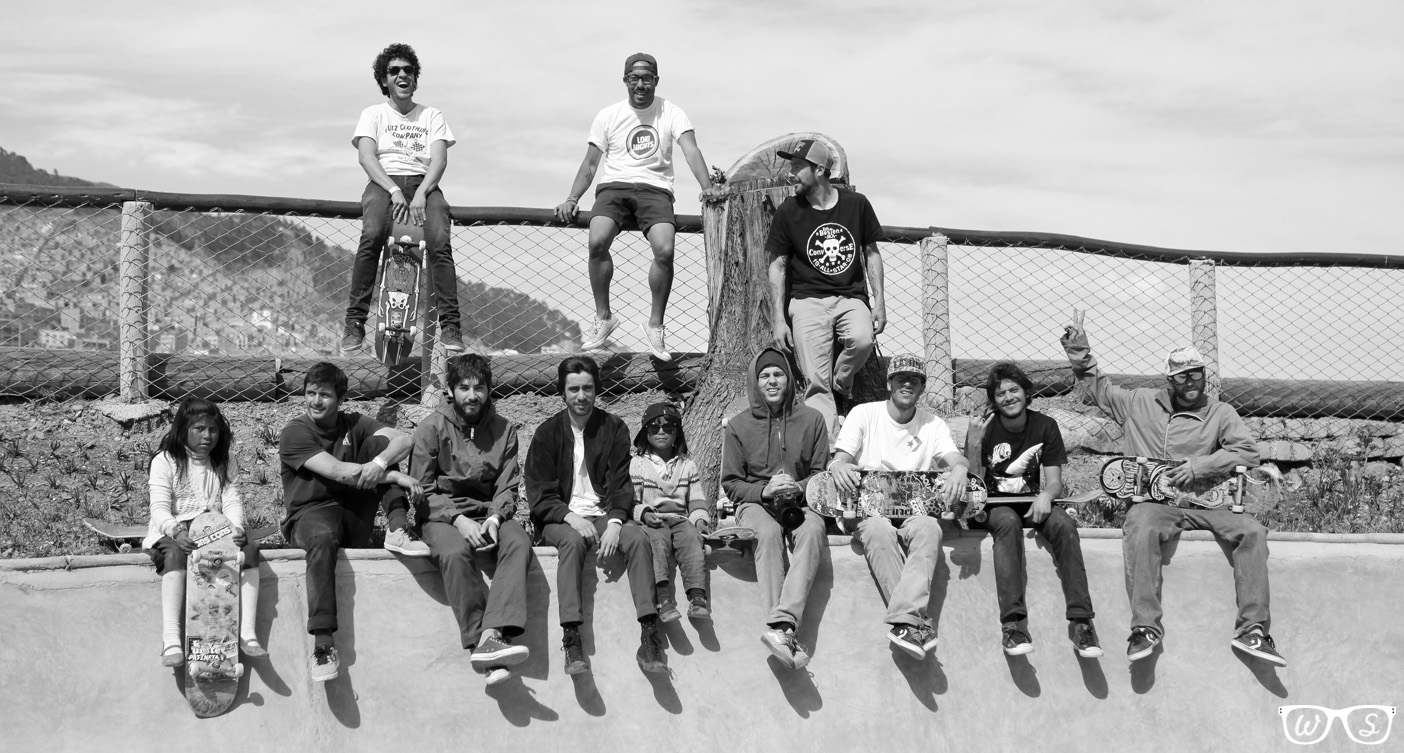 Spending nearly three weeks working in the bar of La Paz's best know party hostel has its ups and it's downs. The best thing is that you get to meet almost everyone that comes through the door, and share a drink or two with them. By far the coolest cats to come through the doors of Loki were the Chilean Converse skate team.

Headed by Juan and Carlos the team manager, the group of sponsored skater boys partied their first night regardless of what they said about being excited to skate Parque de Pura Pura the next day. 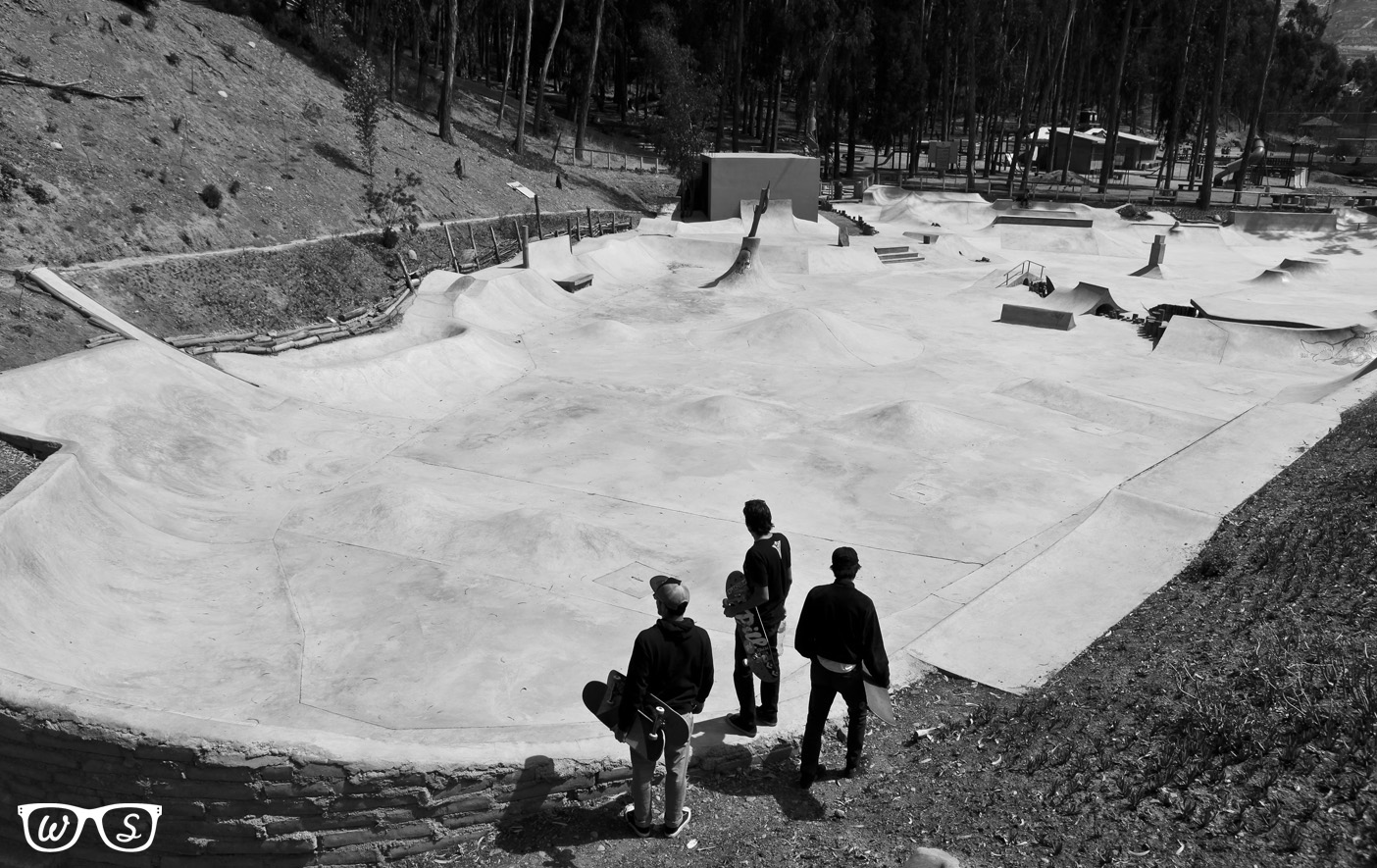 The guys arrive and size up the park

Morning came and I rushed to the bar 10mins before my calling time. Maybe I had a bit too much to drink but I didn't think they did. In just my bed shorts I found Juan in the bar to say I'd be 10mins. Little did I know I was one of the first to awake.

An hour or so later, and several fatty breakfasts down the hatch, we taxi'd to Pura Pura. As we got out and walked I noticed the grim face of Etiel aka "Mr Lucky". I didn't think he'd make it onto his board but he proved me wrong… but only until he sat down to sleep about an hour later. Haha!

"The rest of the guys pushed on in the heat, and very little oxygen' 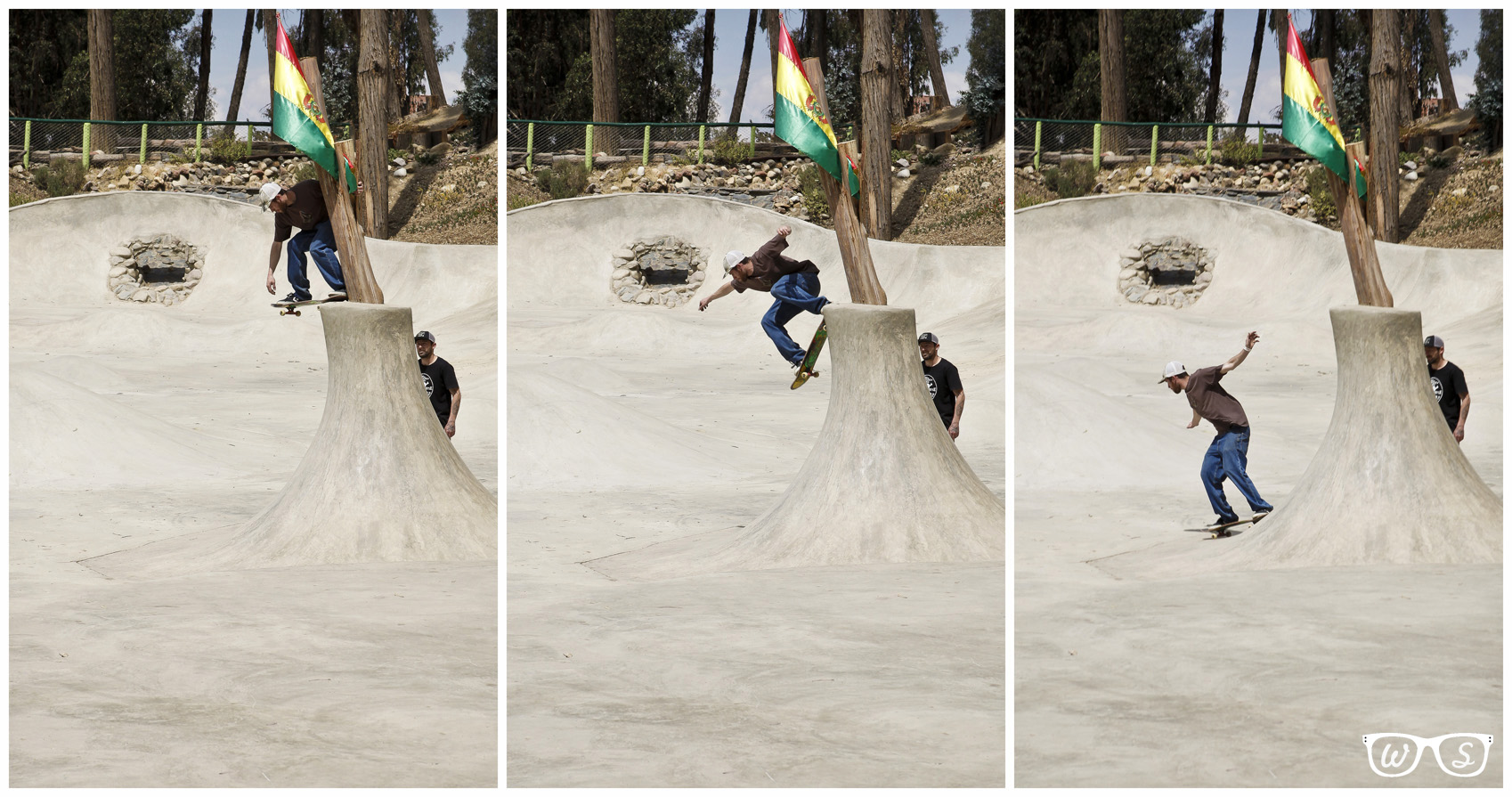 The highest peak in the highest skate park in the world. Conquered.

The rest of the guys pushed on in the heat, and very little oxygen. I didn't know much about skate photography but was loving it! Juan, the resident team photographer gave me some tips and I scouted the massive park. I found the perfect transfer but needed someone 'goofy'. That man was Alberto Montes, Peru Converse's team manager. With Illumani mountain directly in the background it could have been the epic photo of the day if landed. After several attempts, we had the shot! He wasn't about to end there and insist on getting some low shots over the transfer of some grabs. Likewise, we got it in the end even with my Canon 5D being the beast of slow shutter speed cameras. 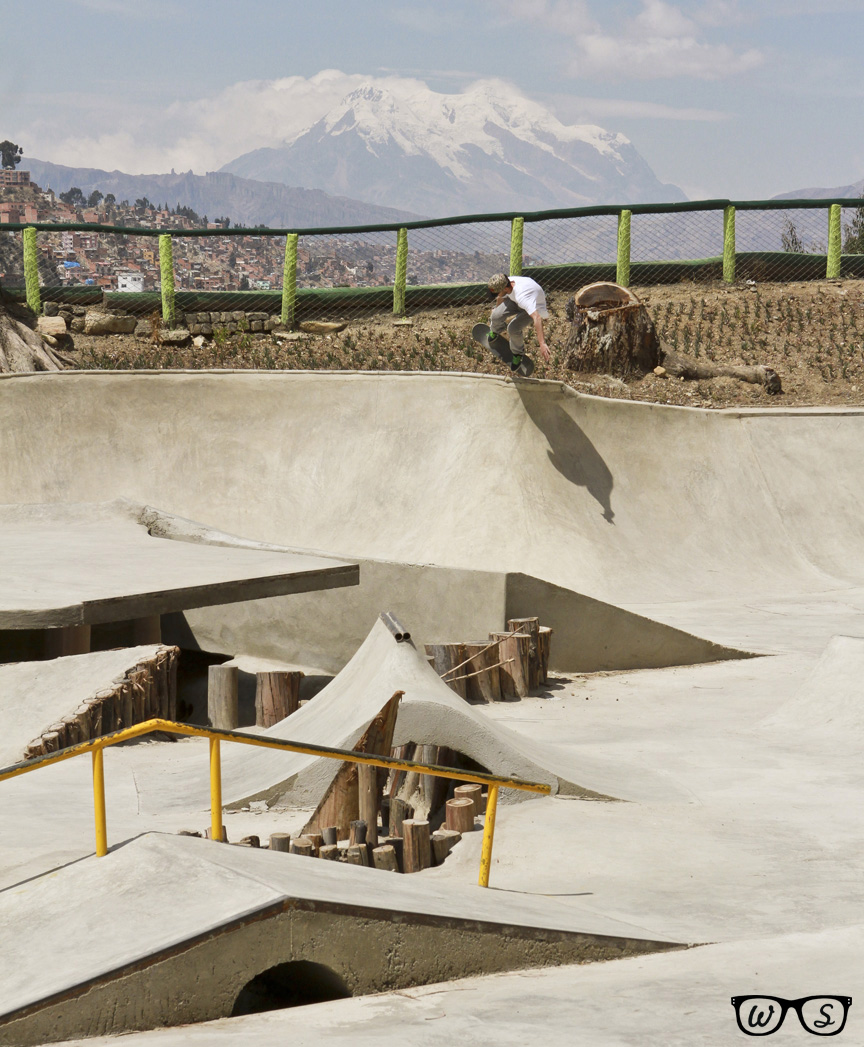 Alberto nails the massive transfer with Illumani Mountain in the background

...And grabs over the next

School was over and the park started to fill with spectators and skaters alike. Before the crowds, two small rosey-cheeked girls turned up with their own board. Not much of a board mind you, but they had fun getting in the way and joining in some antics. 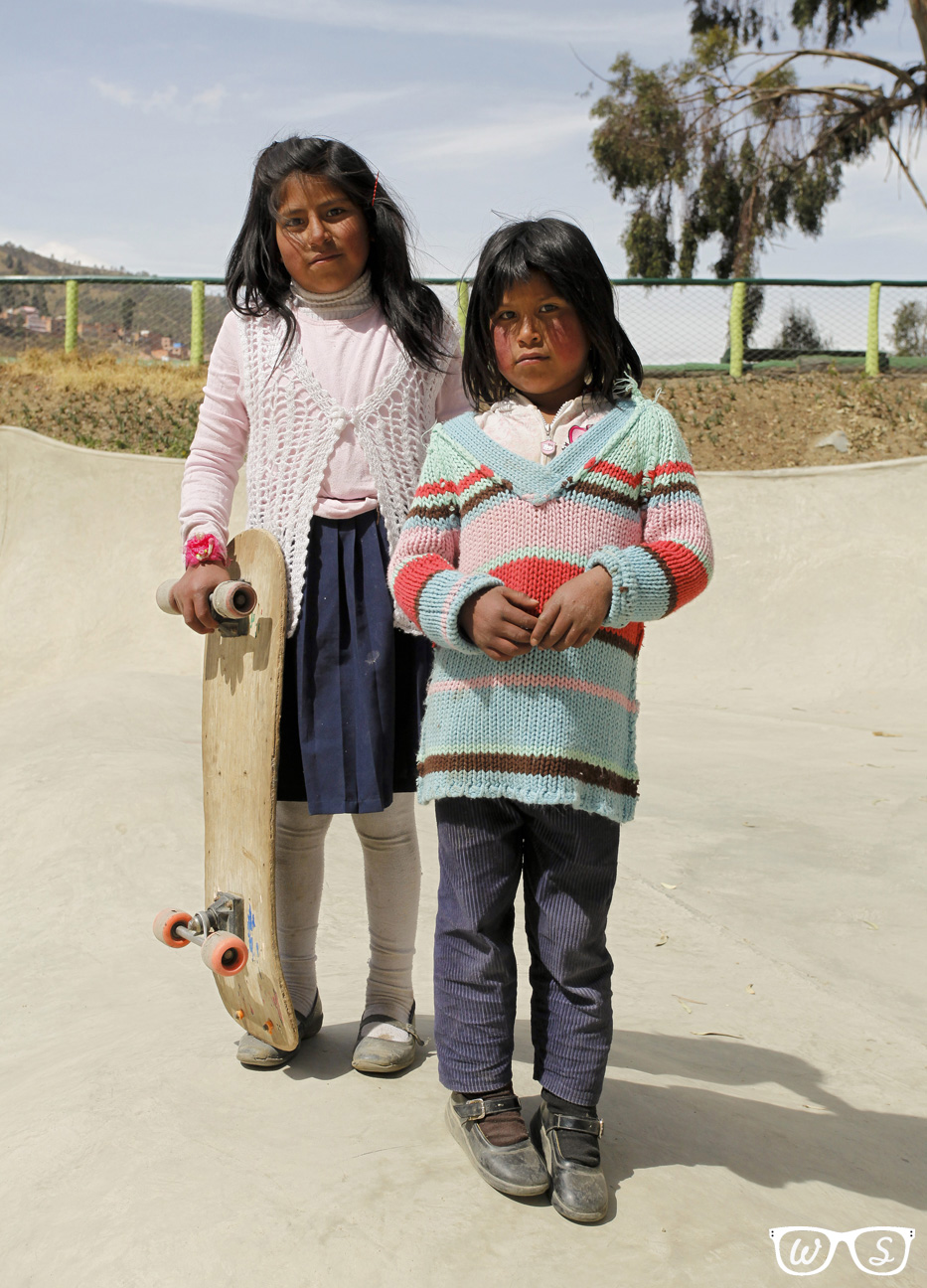 Half of the guys were now napping apart from Carlos and Juan so we called it a day. The only thing to sour the day was Juan's iPhone being stolen by a spectator. I suspected the two little girls after seeing them leave in a hurry up the hill. I'm pretty certain it could have been seen in El Alto markets the following day for 500Bs.(£45). 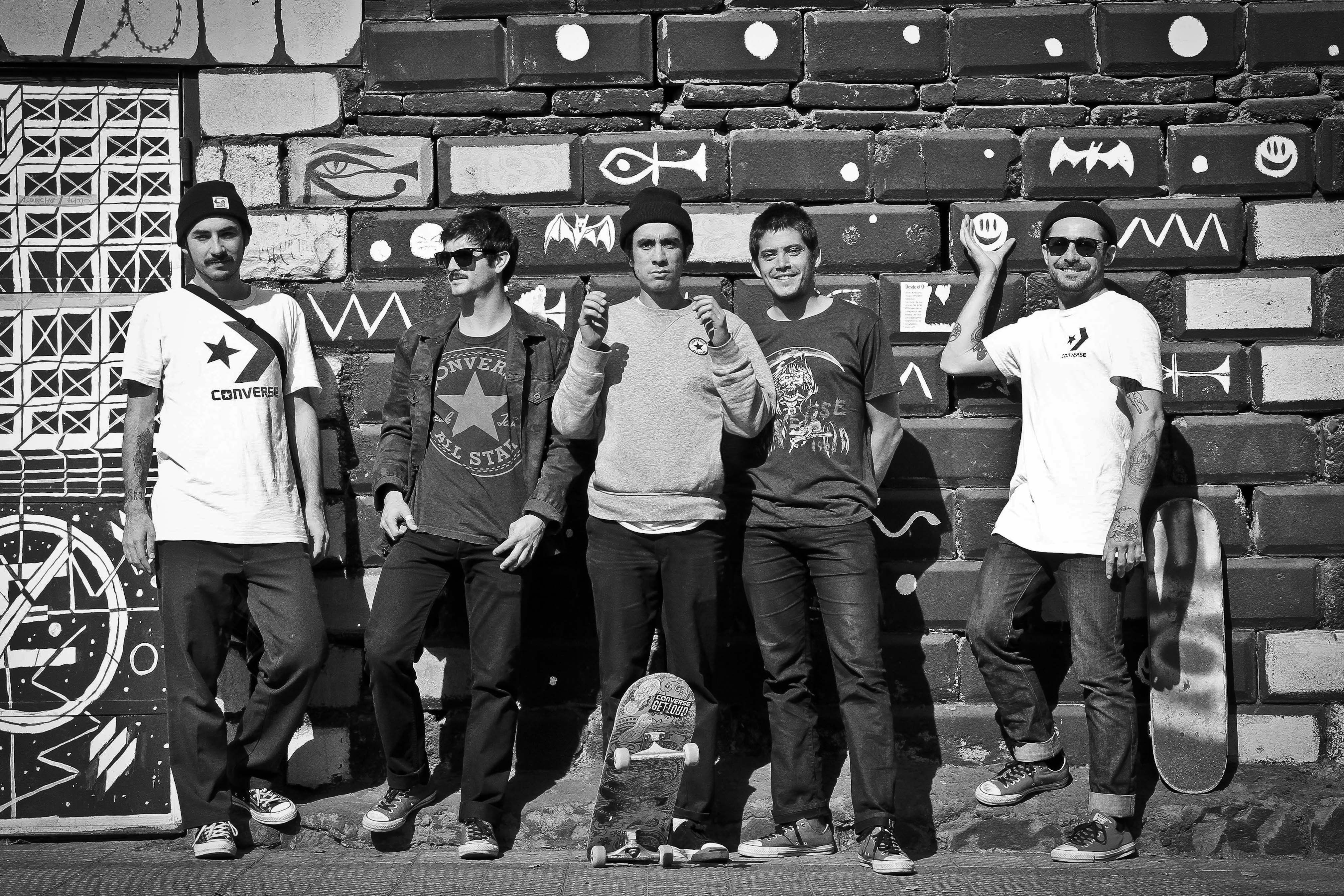 The jack boots and records all your skate and your camera to travel much of Chile, neighboring countries and even Europe. -Form Essential part of skateboards, skate Chilean website that is 100% dedicated to the dissemination of skate in the country and the world. Jota has nerves of steel when facing any spot. ![](/content/images/2014/Sep/Consteam-2014-jota02.jpg)

Perseverance has always been a way of defining this ambassador converse in Chile, is part of the domestic industry as a designer for various brands of skate, with an undeniable passion to make lines in both its graphics and gimmicks seeking more than the virtuosity capacity beyond the limits and move the skate in any condition. ![](/content/images/2014/Sep/Consteam-2014-carloco02.jpg)

Patrick is a solid skater, is recognized among his peers for this feature to be able to realize hard lines just to flow into your skate around town, lover analog photography, duck melon as his friends know him is part of Converse. ![](/content/images/2014/Sep/Consteam-2014-pato02-1.jpg)

Better known as a wet cat, Eduardo Garcia joined the team CONVERSE Skateboarding Chile with great pride representing the 5th region of our country, highlights their skills to kick in adverse conditions, the cat knows how to deliver good standing of any situation. ![](/content/images/2014/Sep/Consteam-2014-gato02.jpg)

Etiel always been known for persevering with any idea, it is able to withstand big drops to bring home such a trick. Also known as Sajor is part of the team that enjoys what he does and does it with passion and it shows all the time kicking on the street all day. 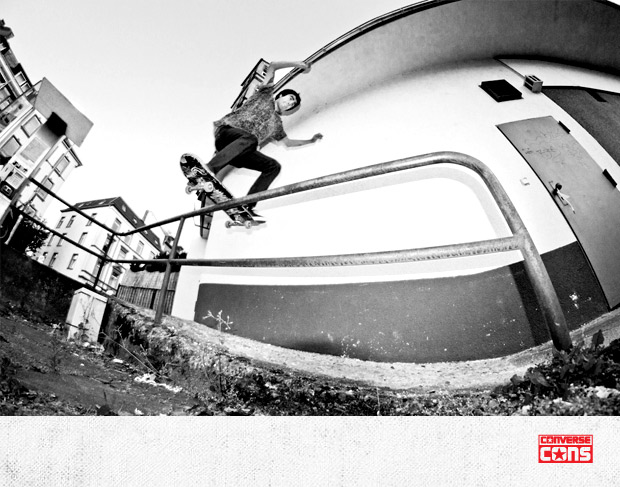 CHECK OUT RAD VIDEOS OF THE GUYS AT PATINETA.CL