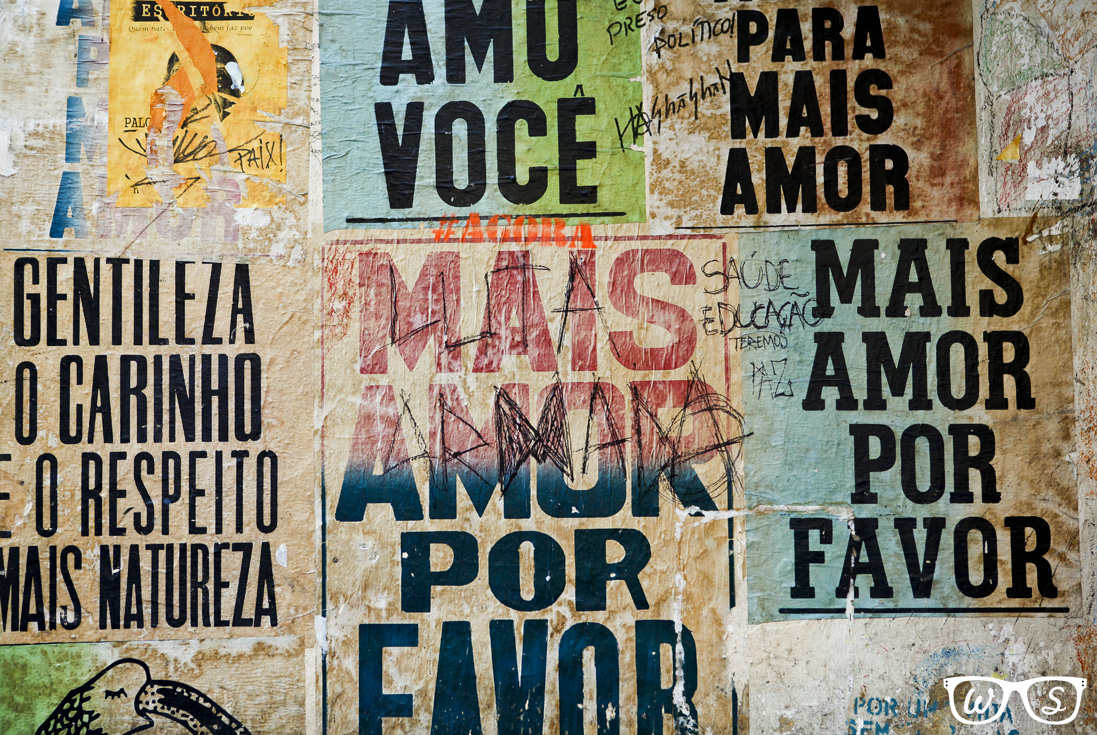 For just a moment, take away the palm trees, the panoramic views of Sugarloaf Mountain and the omnipresent Christ the Redeemer. What's left? Rio de Janeiro, or 'The Marvelous City' will always hold a romantic place in my list of traveled cities, but there's a lot missing from what you get from your friend of relative's postcard.

"As the hype subsided, gringos and gringas packed up, life resumed as normal and I started to see real Carioca life"

Admittedly I arrived in amidst of the biggest World Cup ever to be held, and for the most part I could have thought I was in Argentina with the amount of their neighbours relocating north. As the hype subsided, gringos and gringas packed up, life resumed as normal and I started to see real Carioca life. 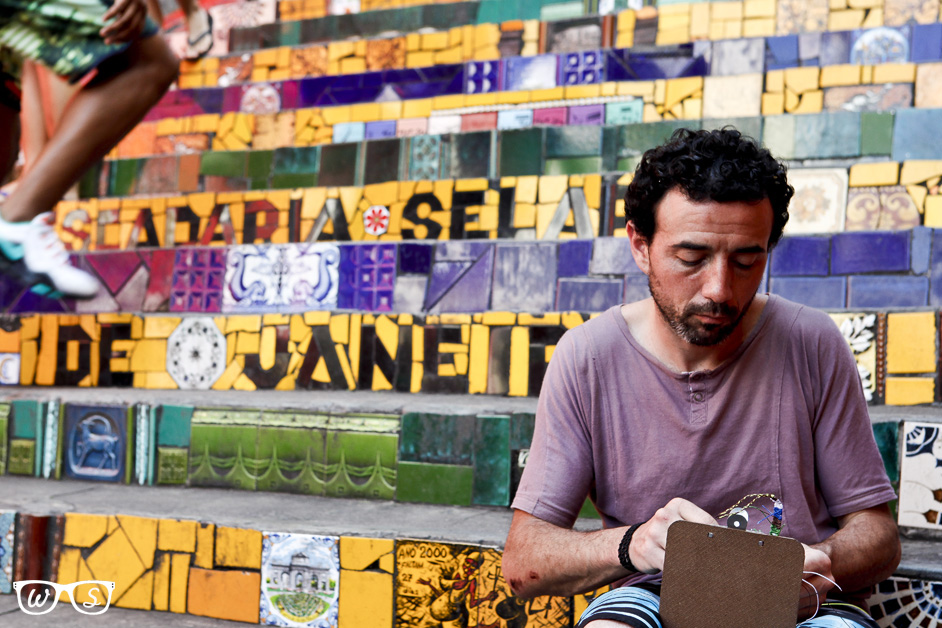 Thousands of Latin Americans flocked to Brasil to sell handicrafts, in the hope of a better life and to capitalise on World Cup tourist trade. This man goes about his business on the famous Seleron Stairs

"..out of the 6.3million residents, 1.4million live in favelas or 'substandard' and irregular housing communities.."

Strip back the above mentioned and you're left with an overpopulated, disorganised and bustling city of cultural divide, on the brink of possible breakdown. In a 2010 census, out of the 6.3million residents, 1.4million live in favelas or 'substandard' and irregular housing communities, which include 763 favelas. A massive 300,000 people live in just the one favela community of Rocinha… more than the whole city of Foz do Iguaçu! Over a 10 year period, the favela populations grew an astounding 20 percent, in comparison to just 3 percent of the rest of the city. In a day-trip to Rocinha I learnt that in fact in recent years, the government has banned any building on undeveloped land. So without land, how is this so? Rooftops. What favela owners do to get around this is sell their roof to a willing buyer/builder who then becomes the owner or their roof and so on and so forth. In one instance, an 11 storey favela took 10 years to build! One of the main issues facing the favela communities is the public's perception that they are all dangerous, not helped by glamorisation of violence by the media. From my day spent in Rocinha I came to realise that for the most part, they are more safe than the streets of Copacabana due to an important set of five rules, adhered to be all favela communities around Brasil. These are:

So you can see, favelas aren't these depicted war zones. Residents more or less lead similar lives to the rest of the cities: they work (hard), they have homes, they have families, they save, they buy, they have internet connections… all just done on lower incomes.

The outstanding thing about this tour was that it opened my eyes to the pride in which Rocinhians and I'm sure other favela communities have for their people. Zezinho the tour operator was born in Rocinha, traveled and lived overseas for many years but has since returned purely out of the love for his Rocinha. Zezinho has DJ'd in many cities across U.S.A. and Canada and now operates a DJ school in Rocinha, funded purely by his tours as a free service to his communities residents with students ranging from 17 to 46yo. With no government help, it's projects such as his that give students the opportunities and skills to go on and chase their dreams of being DJs, producers, or even just learn to spin vinyl for recreation. It was sad to learn that many organisations in fact charge volunteers vast amounts of money to interact and improve the community, but instead hold onto that money instead of putting it where it counts the most. My original plan was to volunteer with one of these organisations for a week or two but after being rejected due to not being able to put up the funds, I'm glad that I didn't. I will though be looking to the future and hopefully return to Rio, and Rocinha to interact, live, and to help the community on my own terms. Put aside nearly being hit by moto-taxis countless times and the rats, dog poo and malnourished dogs beside the road, I immensely enjoyed my day spent in Rocinha and would recommend others to visit on your next trip to Rio. I could go on and on about the astounding things I learnt about favela life, but you should see it for yourselves. 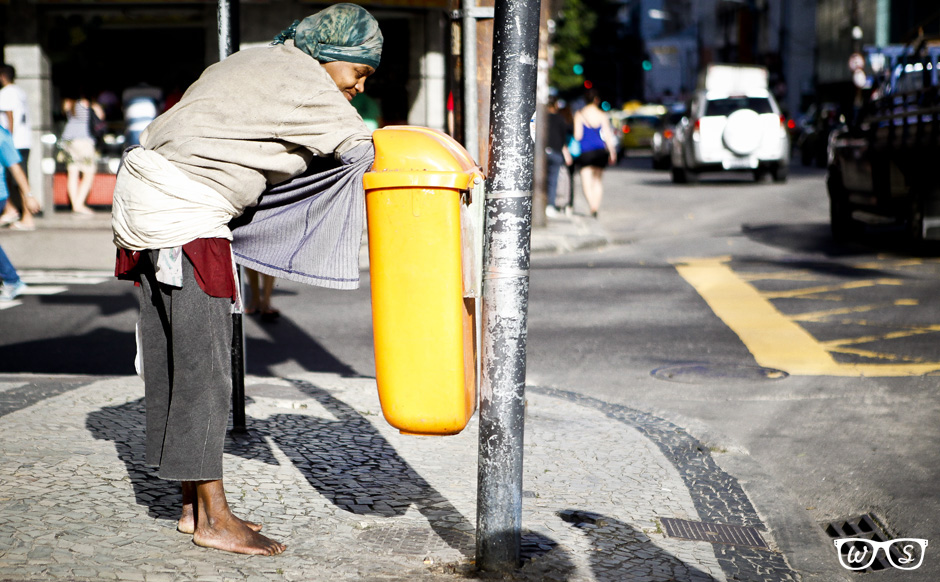 This for many street Carioca, is their only source of food, risking injury and infection for nutrition

Despite the chaotic and crammed nature of the city, it still manages to break down typical metropolis cliche barriers. For one, you'll find the people are friendly! When you get in an elevator and someone else is in there, eye contact is made and you'll almost always get an "Oi, tudo bem?" (Hi, how you going?). Despite looking like a gringo, I continually got stopped for conversation, whether it be in a supermarket or just waiting at the metro station. No one has the same 'self' mentalities that most Western cultures have. It's not what's best for 'me', but best for 'us'. On the many occasions I caught the Metro, I failed to notice one occasion whereby a seat was not offered to a woman (pregnant or not), elderly and disabled people. You certainly won't see that in London.

The view of Ipanema Beach from Rocinha favela.

Unlike the culture I come from, families exist as one, well beyond high school, university or even starting careers. As much as I've always been an independent and self-sufficient person, leaving home at 18yo, I think this style of family-hood makes more sense and merit than those who prioritise individuality. It promotes stability, security and as the 'children' are ready to leave, they do so but more than likely they have had the chance to study abroad, work, travel and save what they need to make secure investments. 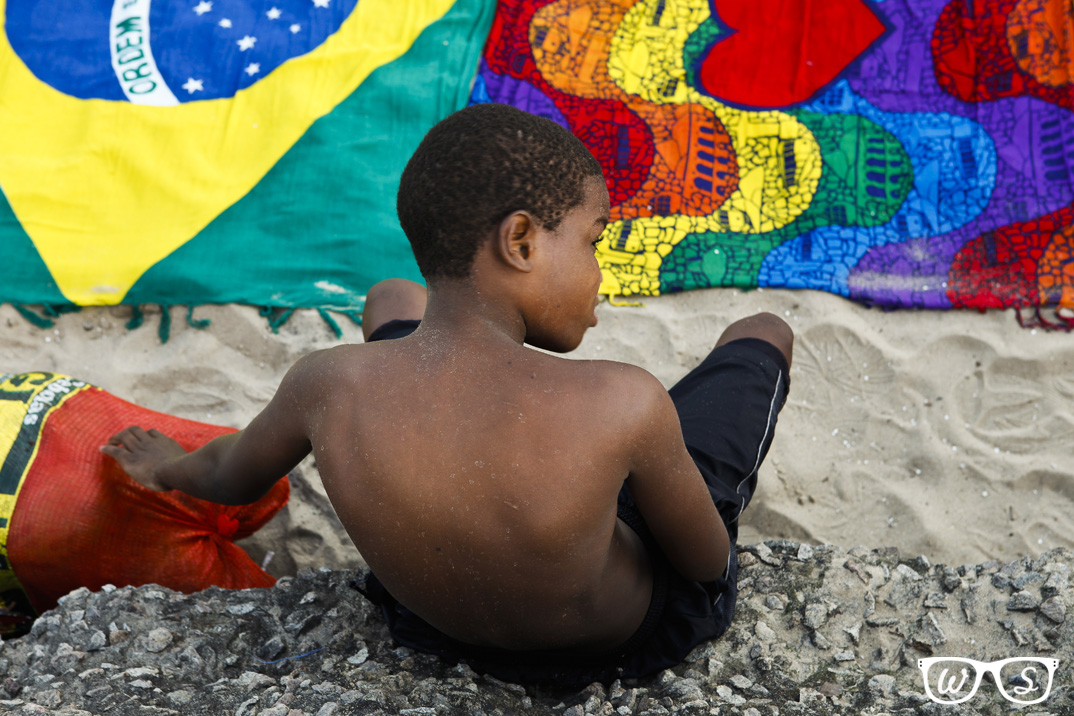 My time in Brasil has sadly come to a close. After 6 weeks, 8 cities, 4 World Cup matches, countless parties, many new friends, a persistant cold and minus many reais, I have farewelled my second home. I'm sure I'll be back again, whether it be to holiday, work, volunteer in Rocinha or just visit the many people I've grown fond of. Of the 8 cities I only stayed in one hostel, which of course meant that I got to know the locals - the best way to travel. I've said it before and I'll say it again, but none of this would be possible without Vitor and his family and friends. You've all made this the best experience I could ask for! Muito Obrigado Amigos!