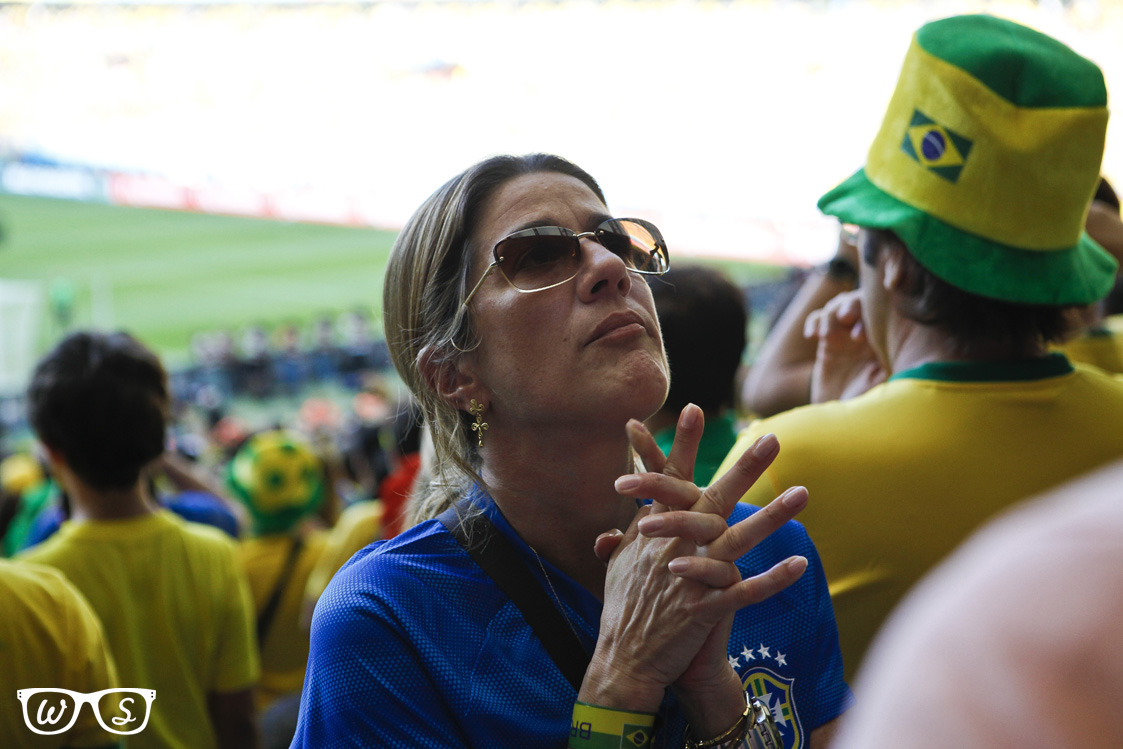 It's strange how things tend to work out (or don't). Every once in a while when they do it seems to make all the times that they didn't, fade into the ether.

After dodging some bad sushi gut in São Paulo, I was headed for Belo Horizonte for the first time, with the notion of being close to the action between Brasil and our former enemies, Chile. After the night bus from hell and no sleep, I arrived psyched for Brasil's 4th match.

"Despite being a bit dazed and confused, I managed to fit in with the nutters..."

My hosts this time round were the Drummond family who have strong ties to my mate Vitor, who was already there. I was welcomed with open arms, as if already part of the crazy clan. Despite being a bit dazed and confused from the journey, I managed to fit in with the nutters.

Three of the lads had tickets, leaving the parents, Lucas' girlfriend and myself to watch the match in their home. As they left lubricated, a phone call came in to say there might be a couple of spare complimentary tickets on offer. We waited anxiously.

The boystrous Mr Drummond or "Divino", grabbed me firmly by the arm and yelled "WE GO!". With less than 2-hours before kick-off, we were on! 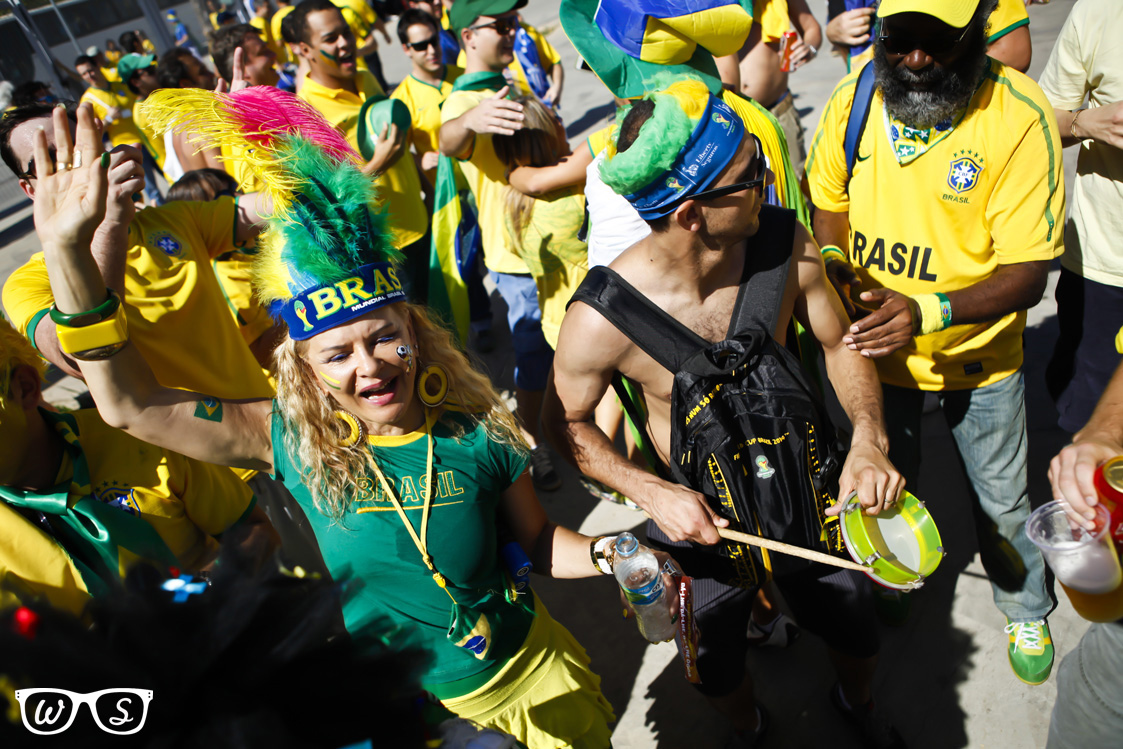 "a sea of yellow accompanied by the sound of drums, horns and whistles deafened the crowd's emphatic chanting..."

With a traded Brasilian flag on my back, rediculous hat aloft, and a Fred moustache, we left for the match. You can't begin to imagine the buzz on the walk to Estádio Mineirão...a sea of yellow accompanied by the sound of drums, horns and whistles deafened the crowd's emphatic chanting. Thousands of smiles lined the gates to enter the stadium with high hopes of proceeding. In the chaos, we struggled to find our gate but managed to make it to our seats with ample time to soak in the atmosphere and of course, a few cervejas. 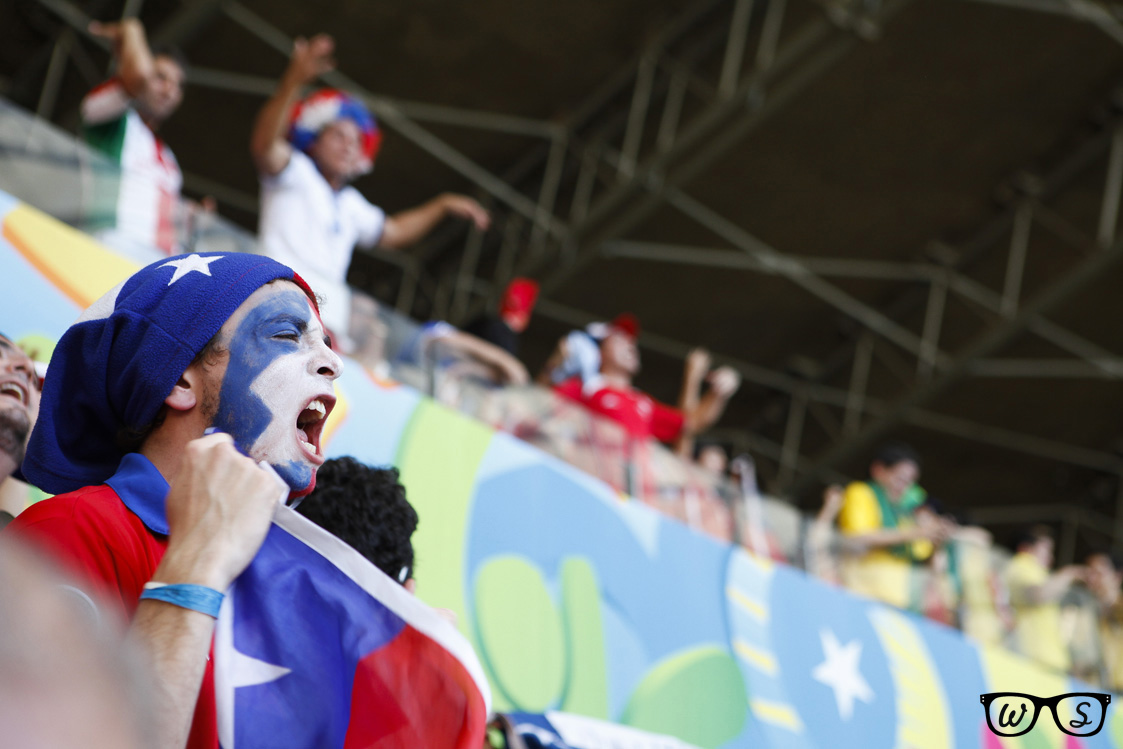 The teams came out and a unified chant bellowed around the stadium as seats became redundant. I think FIFA and the Brasilian government could have saved a few dollars on seats that day as they were hardly used. The nation's anthem came on and in the sheer emotion, I begun screaming mimicked words with Divino as my lead. I've surely never seen anything like this before. Tears cascaded down cheeks of yellow and green facepaint while hands proudly held abreast. In the moment I was too overwhelmed to get a shot, but what proceeded was equally as powerful.

The final whistle blew as it ended 1-all. Another half hour of tense action and we were all nearly voiceless with nerves frazzled like bad split ends. The tension in Belo Horizonte could be cut with a knife as went to a penalty shoot out.

Scores see-sawed and as the final Chilean penalty knocked the upright bar, our heartbeats stopped as one, until we knew it was definitely out of the goal. The following events can best be described as pure madness! In between trying to capture the moment, I'm quite certain I've never hugged that many strangers in the space of a minute. Almost every possible emotion felt all in one place in one instant moment! It's amazing what a sport can do to people. Well, I feel bad calling it a sport, as here in the home of football, its not sport but a life for many. It deserves to be called more than a sport. Joga Bonito seems to fit pretty well. 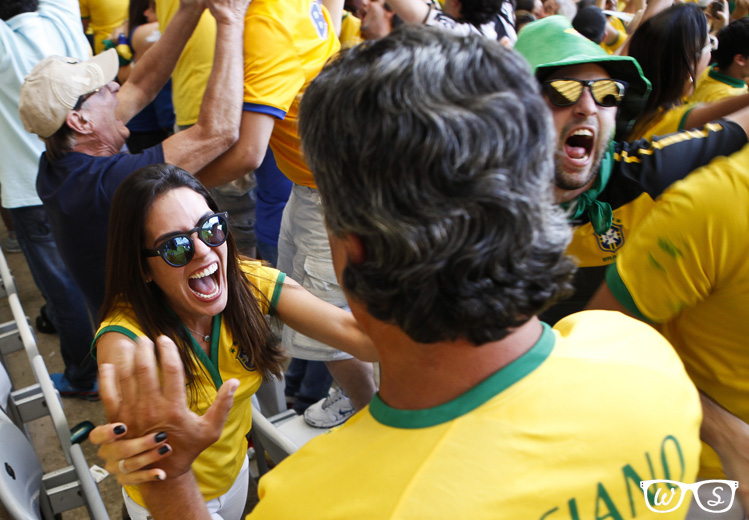 I owe a lot to the Drummond family, as they have to date, given me the finest sporting experience of my life. I think the only thing that could top that would be to see Brasil win in the final at Maracanã. I'll be in town, let's see how lucky I am...