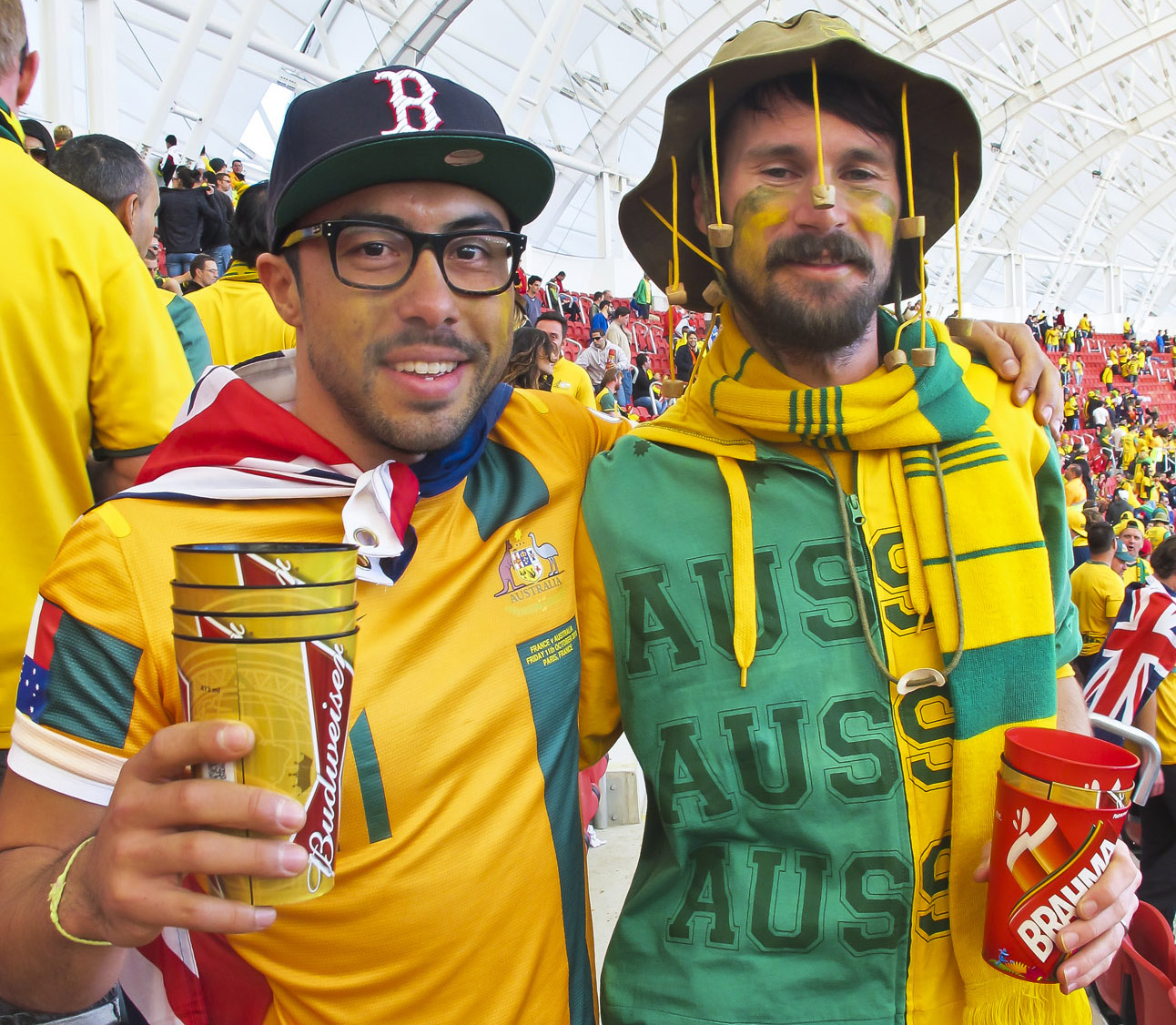 Disclaimer: If you read this, you'll either learn some Portuguese or have no idea what I'm on about.

The 'Copa do Mundo' as I now call it, is well under way. One 'festa' after another and my liver has taken a beating. From city to city the clans of Aussie and other World Cup nation's supporters line bars and drink beer like fish in celebration that we are all gathered here as one football family, united for the first time in 'quatro anōs'.

After my epic 44hr journey I arrived early into São Paulo on the opening day of Cope do Mundo and in high spirits. After a good scrub, I loaded up some washing, put devices on charge then hit the pavement to see the city, or what I could in a few hours before getting ready for the match. The city, despite having a public holiday, was coming alive.

'Bottles of vodka and cachaca flowed with beer chasers.'

I had the privilege of staying in São Paulo with Lucas, an 'amigo' of my good friend Vitor. Lucas, a well-travelled and English-speaking Brasileiro, was a fitting example of the city's upper-middle class who worked hard but partied just as hard. Not having pre-planned somewhere to watch the big opening match (Brazil v Croatia), Lucas invited me to join him and thousands of locals in São Paulo FC's stadium, for a private event…'Muito bem!!' As I was expecting to be following the 'Australiano' trail, a party with locals was perfect. After some cervejas and 'caseiro' caipairinhas, we set off…by car. Entering the stadium, the vibe was short of crazy. Bottles of vodka and cachaca flowed with beer chasers. 'Gol' after the goal we went into madness and the 'festa' kept on long after the match…then Lucas drove us home with the assistance of a GPS app that spots police. Crazy as it sounds it's the usual way in Brazil. A few hours rest before I woke to frantically taxi to the airport.

Touch down in Cuiaba. The first noticeable difference was the heat. I was loving it! After a couple of weeks of freezing my butt off in Argentina, Uruguay and late-night bus terminals, I could strip down to a t-shirt, shorts and Havaianas combo. My host was yet again a friend of Vitor's, who used to play 'futbol' with him in Rio de Janeiro. Communication was bound to be difficult as Max did not 'fala Ingles'. The car ride from the airport was mostly hand signals and broken Portuguese with me just saying "sim" and "bem" and "desculpe, não entendo". Google it. We arrived at his mother's house where I would be staying, not realising I'd be staying with her, and we got straight onto Google Translator, with Vitor also helping out via broken Facebook messages back and forth. Enough said, I made it into town not long after, for the build up of the first Aussie match against Chile. Finally the day had come. Throwing back some Brahma it was of course easy getting chatting to the other Aussie contingency. The best suggestion of the day was to head over to the Socceroos hotel which was nearby to send them off before the match and get a photo with Timmy. 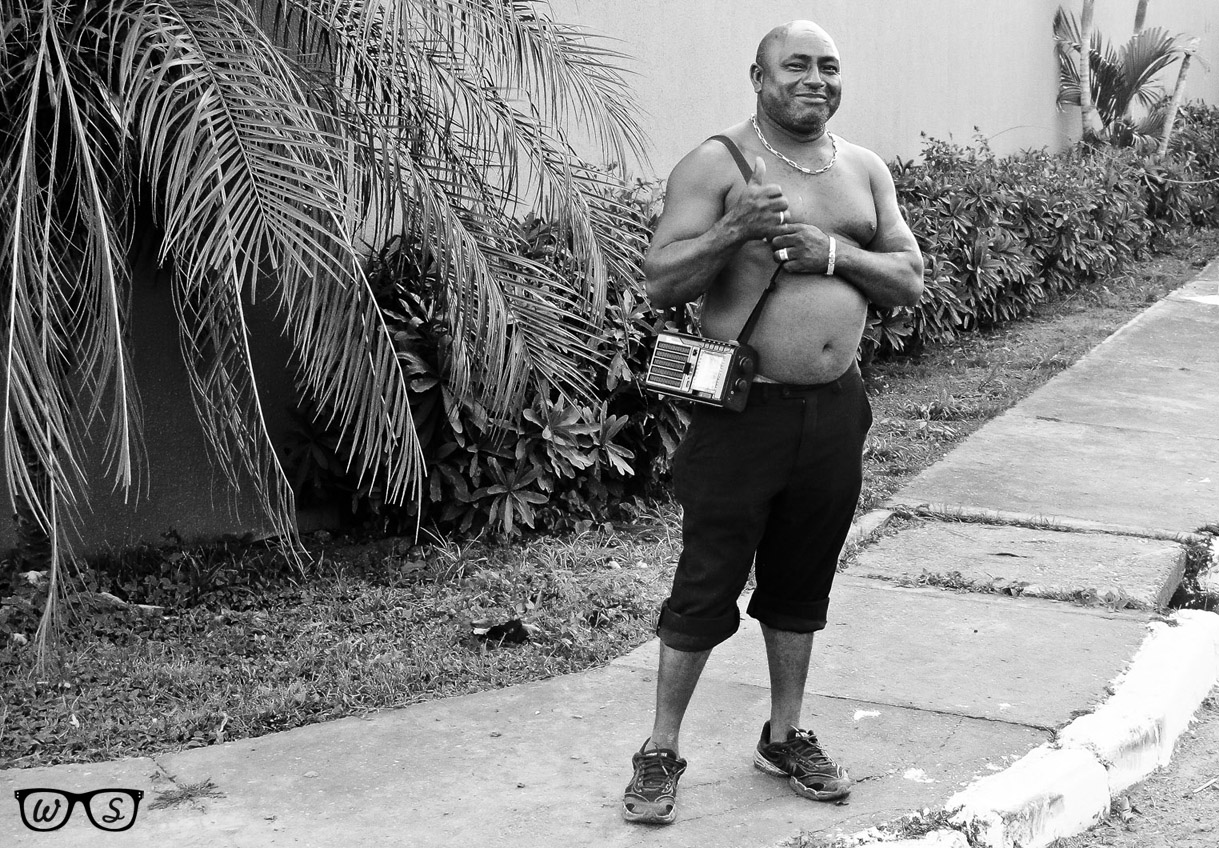 The walk to the stadium was as much of a celebration as after the match. We all had high hopes and could taste victory. With the number of Chilean supporters chanting "Chi Chi Chi, Le Le Le…We are Chile!!", vastly outnumbering the meagre "Aussie Aussie Aussie, Oi Oi Oi!", the locals were backing the underdogs. We were celebrities in Cuiaba. Each of us stopping for photos with locals on the streets standing outside as we past by. The highlight was when one of the guys (Aaron, i think his name was), gave a small child two tickets to a match in Cuiaba that he couldn't go to. The amount of generosity was astounding the boy was left shaking and almost crying in delight. It's nice to know that some of us Aussies have a decent heart. The satisfaction in giving that child the gift of a lifetime, grossly outweighed what would have been the time spent earning the money to pay for them. This is what Copa do Mundo is about!

'..the local girls were more than happy to practise their English with the Aussie lads, although for some, conversation was not necessary.'

There's no point going into details of the match, the stadium and how loud we chanted…but it was incredible despite losing. The party went for hours in the street and in the bars and we all mingled with the locals and rival Chileans. Cuiaba is a quite remote city that doesn't see many international tourists, and I think the local girls were more than happy to practise their English with the Aussie lads, although for some, conversation was not necessary.

The next morning did not feel so good. Waking in 30 degree heat, hungry and not being able to communicate…what was I to do? Just when I thought I was stuck with no WiFi, Max came to my room to hand me a piece of paper with a password. Back in the game! After an 'surpreendente' meal by Max's Mum, I was nourished and feeling much better. I would always prefer to immerse in local culture, with locals, then do it with a bunch of 'gringos' and thats what we did. After going into town for some drinks, we drove into the outer suburbs to their friends house for BBQ and super cold beers. Yet again I was the only English speaker, but this meant I had to practise and occasionally get the phrase book out. We conversed as much as possible and joked, and I even instigated some 'funky' dancing. Quite possibly the highlight of my stay. It got to 3am and we headed to the airport for my early flight. It was sad to say goodbye to my great hosts.

'Side burns like Elvis, he was proud of his city, proud of his business and proud to be a part of Copa do Mundo.'

Touchdown in Porto Alegre. A slightly different scenario as my host was from AirBNB spoke English. I was due to stay in a modern apartment for the next 4 days so the first was spent settling in and resting the liver. I don't think I realised exactly how much partying was to be done in Porto Alegre. The hype was building in the town for the Aus v Netherlands clash, and night after night more supporters filled the bars, consuming as much beer and local 'gaúchas' as they could. Match day came around and it was an early and fuzzy start, with the kick-off at 1pm. With some known entourage (Mike Rice and the gang) by my side we downed breakfast beers at 10:30am before cramming into taxis to the stadium. Mike and I were left til last and struggled to hail one, til a local guy (Antonio) offered to give us a lift. What a great guy he was! Side burns like Elvis, he was proud of his city, proud of his local business and proud to be a part of Copa do Mundo. Yet another example of the 'futbol' spirit, he drove while showing us photos of his family…what a great experience that was.

'...yet again I started dancing 'funky' with the locals'

Once more, there's no point detailing the match, however, a special mention goes to Tim Cahill because as soon his volley went into the back of the net we all had an absolute fit! That was certainly special! Probably more so than the 3 or so minutes we lead 2-1. Ahh memories! You can only imagine the carnage on the streets from then on…and yet again I started dancing 'funky' with the locals. I think it's my new thing. The rest of the night is well, a blur but I made it home, only to discover I was missing about $R400(£100) from my wallet. Não muito bem! Anticipating an epic hangover, I had already asked to stay another night so I cancelled my next accommodation in Florianopolis. For once I was glad that I was hungover, as it meant I'd stay another night, and I'd meet a rather special 'gaúcha'. Having already lived in Sydney for a few years, her English was better than good, and the first night we went with a few of the guys and her fiends to Marley Bar, tributed to Bob of course. Imagine a three-storey terrace house turned into the ultimate party house with ping-pong + pool tables, bean bags and a 'smoking' room. More importantly we were the only Aussies there! As the story goes I ended up staying yet another night and had a great time with a local Brasileira. 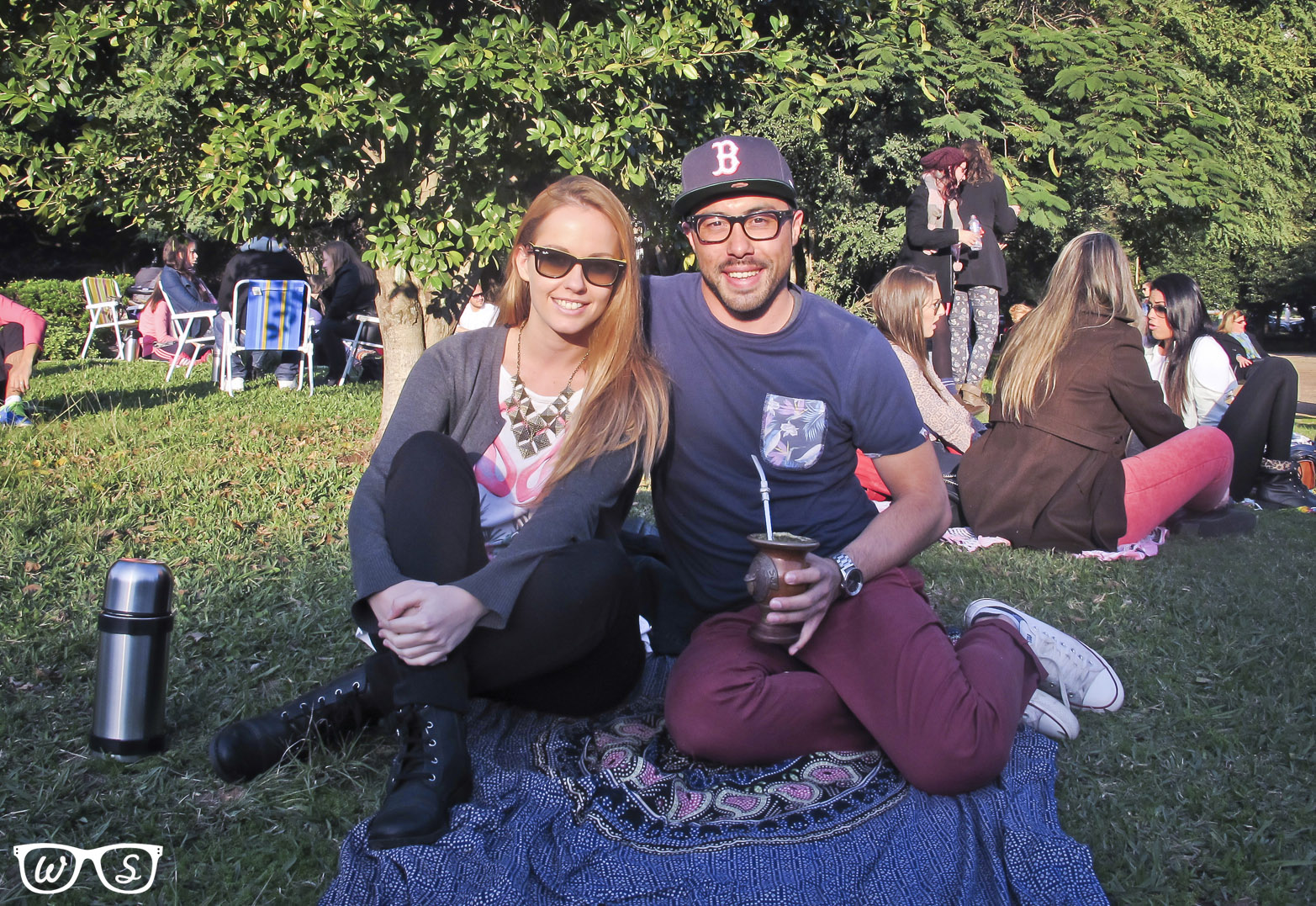 As I'm sitting on my snoring bus out of Porto Alegre to Curitiba, I'm feeling sad to to say goodbye. Nevermind, I'm sure I'll be back soon enough. 'Obrigado Porto Alegre… Você foi incrível!' Now to try and sleep while the lady in front of me is reclined almost horizontally onto my lap. Mmmmm cosy...