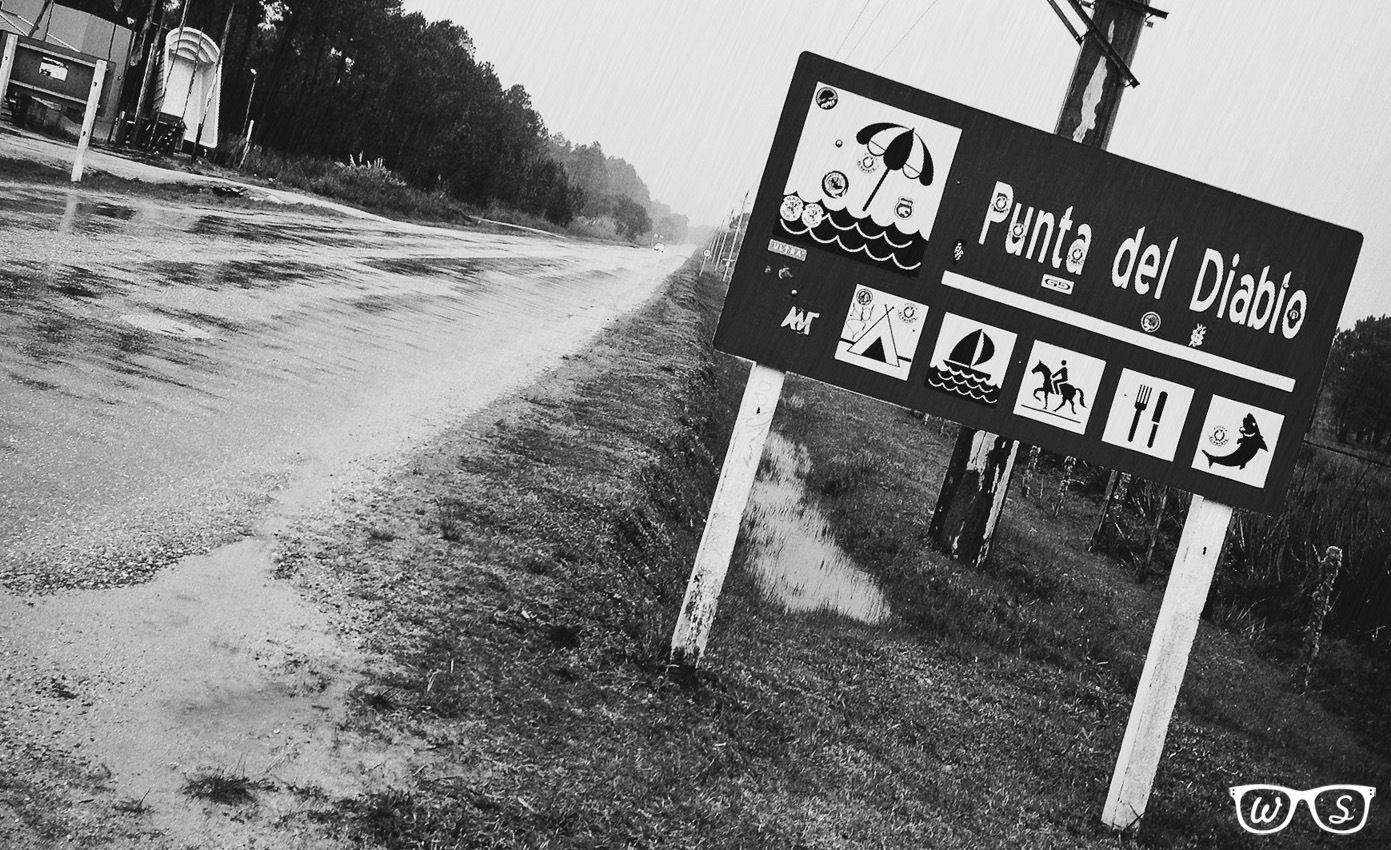 I've now just arrived in Punta del Diablo, which is a small fishing/surfing village on the coast of Uruguay, not far from the Brazilian border. Dirt roads and own-built beach shacks fill the town along with many stray dogs.

Although it seemed like an easy transit, it didn't turn out to be. Having followed the location of our bus the journey on my iPhone using free wifi, I managed to doze off at just the wrong time. I woke thinking we were coming into 'PdD' when we were actually heading away from it. Shit! There was no way the driver would turn around already an hour behind time due to bad weather. I decided to wait til the next small town which from Google Maps, was only a few minutes away. Using broken Spanish and hand gestures I explain my error to the driver and he tells me "Rutas del Sol" pointing to the front of his bus.

It'd just started raining and I unravelled my bag covers and waterproof jacket while waiting for "Rutas del Sol", whatever that is. Thankfully my saviour bus arrives..."Punta del Diablo?", to a reply which I have no idea accompanied by a signal to get on. "Muchas gracias, muchas gracias! Lo sienta no hablo español..." and I blindly get on. Following our return journey via GPS, I hope that he takes me the whole way. Unfortunately not. I get dropped at the nearest point from the freeway, no less than 5km away. "tres kilometers" he says! I know its not but there's no other way I'm getting there so I walk. The rain gets heavier. Then heavier. My waterproof jacket turns out, is not waterproof. I walk briskly, occasionally taking my phone to check how far I've gone. I reached an abandoned bus shelter just in time before the heavens truly open.

Just when I feel completely alone, a stray dog joins me for company only to remember I haven't had my rabies vaccine. He was friendly enough but I stayed away. The rain eases and I make a run for it! After memorising my directions, I can't figure out if the dirt roads are in fact the ones mapped by Google. After having maybe a dozen cars drive right past me I finally had someone offer to give me a ride. Cautious at first, the two guys looked very genuine and the passenger resembled Patrick Swayze in Point Break so I accepted their offer. Still unsure where they were taking me, I got back onto the GPS. Instead of just driving me the whole way which wouldn't have been much trouble they dropped me at their house and gave me directions. I was still greatful and gave Swayze a solid handshake. With his directions I still wasn't sure and got my phone out for the last time. 40mins in the rain and 5km later, I made it. The first thing I see was other young travellers centred about an iPad on the sofa.

I guess the point I'm trying to bring up, is that without an iPhone and free wifi on the bus, how would I have known where I was? How would I have directed myself towards my hostel? These days noone leaves the room, let alone their house without equiping themselves with a wifi communication device. What used to be busy hostel computer rooms are now filled with sofas for gap-year travellers to lounge on their tablets. We don't know how to function or plan our lives without access to wifi.

How did people travel before the internet and unlimited wifi everywhere? My night sitting by the fireplace here in Punta del Diablo, away from civilisation is exactly what I needed. Now for some time 'disconnected'. Tomorrow is my last day of solitude before entering Brazil for 6 weeks of madness and I'm going to make it a wifi-free one. Mundo bueno noche...